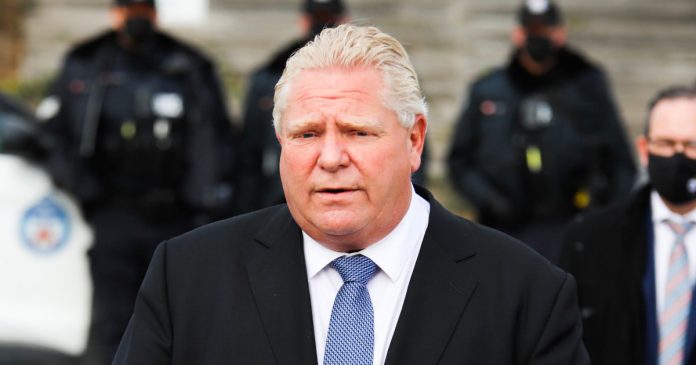 The Ford government is set to introduce a bill that would allow people’s driver’s licences and vehicle registration to be revoked for participating in blockades the province deems illegal.

“Ontario is a strong, reliable trading partner, and we are signalling to the world that we continue to be open for business,” said Ontario premier Doug Ford in a press release on Monday. “We will do everything in our power to protect our workers, job creators and international trade relationships from any future attempts to block our borders.”

This bill, called the Keeping Ontario Open for Business Act, would “provide police officers with additional enforcement tools to impose roadside suspension of drivers’ licenses and vehicle permits, seize license plates when a vehicle is used in an illegal blockade and remove and store objects making up an illegal blockade.”

The province also said it would be investing about $96 million in new measures to prevent future blockades. The funding would include enhanced training about public order policing through the Ontario Police College, establishing a permanent emergency response team for the Ontario Provincial Police and purchasing equipment such as heavy tow trucks.

Protesters occupied an area near the Ambassador Bridge in Windsor for about one week in February, blockading the busiest international trade route between Canada and the US.

The blockades were part of the convoy protests taking place across Canada, demonstrating against the requirement that cross-border truckers be vaccinated and other COVID-19 restrictions.

Other blockades were held in Emerson, Manitoba, Coutts, Alberta. and Surrey, British Columbia.

The Ambassador Bridge blockade was cleared and reopened on Feb. 13, two days after an Ontario Superior Court judge issued an injunction.

The decision gave protesters until 7 p.m. to move their trucks. A joint force of local, provincial and federal police forces then descended on the demonstration, towing vehicles, ordering the protesters to leave and arresting anyone who refused.

Despite the Ambassador Bridge having been reopened, Prime Minister Justin Trudeau named blockades as one of his reasons for invoking the Emergencies Act on Feb. 14 to manage the trucker protests.

Trudeau said that the never-before-used measure was necessary to give the Canadian government and police forces more power to break up the trucker protests.

“There’s a high level of frustration that this situation has gone on as long as it has,” he said. “Those people have gone from protesting and disagreeing with those (COVID-19) measures, to limiting and blocking the freedoms of their fellow citizens.”

Multiple premiers spoke out against Trudeau’s decision, saying it was unnecessary and that there were adequate laws and police resources to manage the trucker protests.

Ford, however, openly applauded Trudeau’s use of the Emergencies Act.

“I will support the federal government in any proposals they have to bring law and order back to our province,” he said.