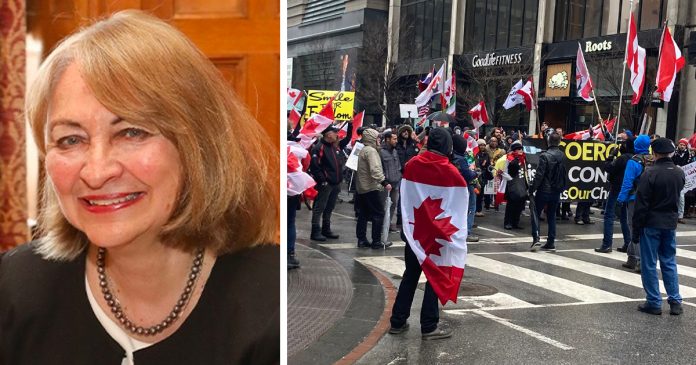 A Trudeau-appointed senator who complained about the noise of freedom demonstrations this weekend in Toronto appeared to consider protests opposing Chinese communism just as unacceptable as protests demanding freedom and opposing Trudeau.

Senator Donna Dasko tweeted on Mar. 19 as freedom convoy protests against the erosion of freedoms under COVID-19 mandates were taking place in the city’s downtown.

“These loud marchers today in downtown Toronto remind me of the occupiers of Ottawa that I saw last month. Against vaccine mandates, against Chinese communists, against the World  Economic Forum, anti-Trudeau, demanding freedom, and more!” tweeted Dasko.

Canadians were quick to call out Dasko for seemingly taking issue with a pro-freedom movement.

“Perhaps you could look into getting their bank accounts frozen without a court order. I hear that’s a totally legit tool in the toolbox these days,” tweeted Macdonald-Laurier Institute’s Director of Domestic Policy Aaron Wudrick.

“I’m sorry Senator, but is there a problem with supporting freedom and opposing the Chinese Communist Party?” asked True North fellow Andrew Lawton.

True North reached out to Dasko to give her an opportunity to comment but did not receive a response by publication.

According to her biography, Trudeau appointed Dasko to the Senate on June 6, 2018. Prior to becoming a senator, Dasko was a pollster and media commentator.

Several cities including Calgary and Vancouver saw freedom protests on Saturday. In Toronto, protestors gathered at Nathan Phillips Square and marched through other parts of the city’s downtown.

In February, Trudeau invoked the Emergencies Act to crush protests in Ottawa calling for an end to vaccine mandates and other pandemic restrictions. Trucker protests have nonetheless continued across the country, and smaller demonstrations have returned to Parliament Hill.

Despite his claims about the movement being funded by foreign extremists, several key testimonies have since poked holes in the Liberal government’s narrative.