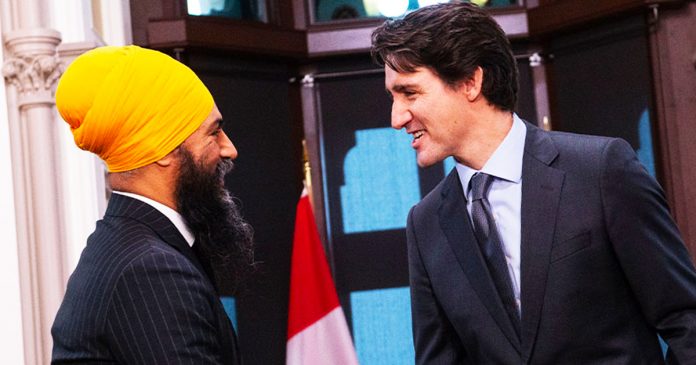 Jay Goldberg is Ontario Director at the Canadian Taxpayers Federation.

Now that the years-long Liberal-NDP courtship has turned official, Canadians should brace themselves for an unwelcome raft of higher taxes and unsustainable spending.

With Prime Minister Justin Trudeau inking a deal with the NDP to keep him in power until 2025, Canada’s finances are headed from bad to worse. To help justify overspending, the Trudeau government might impose an NDP-favoured wealth tax to pay for some of the commitments the Liberals have made to the NDP.

Thanks to six years of the Trudeau government’s reckless fiscal mismanagement, Canada has a $1 trillion debt tab and a deficit this year of $60 billion. Taxpayers are forced to pay more than $2 billion per month to bondholders on Bay Street simply to pay for interest on the national debt.

With the Bank of Canada set to raise interest rates several times this year, that interest number will surely worsen. Now that the Liberals will be on the hook to push through expensive NDP-favoured big government programs, the Trudeau government will be searching for new ways to tax Canadians to deal with the nation’s burgeoning credit card bill.

The Liberal-NDP agreement is full of big-ticket items, but it offers no plan for how to pay for any of it. That’s like planning a trip to Disneyland when you can’t afford to make rent.

Wealth taxes have long been pushed by politicians who assure people that someone else will always pay. Those politicians would have you believe that there’s a money tree growing in the prime minister’s backyard to cover the tab.

The NDP told Canadians during the last federal election that only the ultra-rich would feel the effects of a new federal wealth tax. But wealth taxes don’t work that way. Even if wealth taxes are only directly imposed on wealthy Canadians, the ultimate outcome is economic pain for taxpayers across the board.

If Trudeau caves to the NDP on wealth taxes, Canadian taxpayers at every point on the income spectrum will pay the price.

The Trudeau government has already made Canada a less attractive place for entrepreneurs and businesses to invest by doubling the national debt, introducing a costly carbon tax, and pursuing a fiscal agenda of run-away spending. In a world with over two hundred countries and tax systems, a wealth tax may be the final straw for potential entrepreneurs, who can pick up and move in a heartbeat.

For those who argue that the rich won’t just get up and leave if a new wealth tax is introduced, consider the experience of France. France lost 12,000 millionaires in a single year thanks to its wealth tax regime. The country’s socialist government scrapped the tax less than a decade ago, with present French President Emmanuel Macron declaring that the wealth tax had turned France into “Cuba without the sun.”

For those Canadians who believe wealth taxes will never hit them personally, think again. When the federal income tax was introduced, it only applied to the top two per cent of income earners. Now we’re all stuck paying an annual income tax bill. Wealth taxes could start the same way but follow a similar path.

When it comes to wealth taxes, Trudeau needs to draw a line in the sand. He should look for ways to make tax dollars go further rather than soaking Canadians with a new tax that would make Canada a much less attractive place to invest and do business.

Jay Goldberg is the Ontario Director at the Canadian Taxpayers Federation