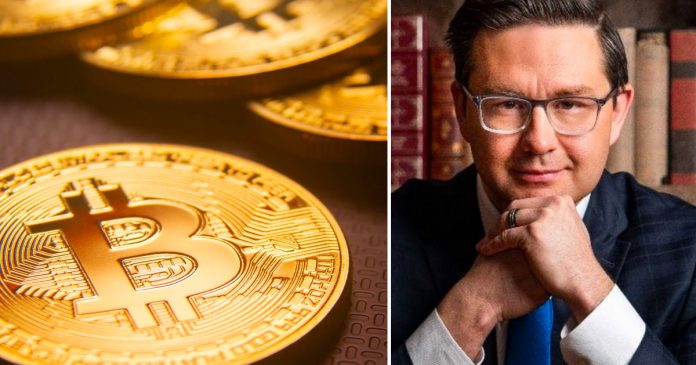 Conservative leadership candidate Pierre Poilievre wants Canada to be the “blockchain capital of the world.”

At a campaign stop in London, Ont. on Monday, Poilievre said Canadians need more financial freedom, which cryptocurrencies including bitcoin can offer.

“Government is ruining the Canadian dollar, so Canadians should have the freedom to use other money, such as bitcoin,” Poilievre said. “Canada needs less financial control for politicians and bankers and more financial freedom for the people.”

Poilievre said if elected he would keep crypto legal and work with provinces to ensure there are clear rules across jurisdictions for blockchain companies and those using cryptocurrencies.

Poilievre also said bitcoin offers Canadians a reprieve from inflation, which is higher than it has been in decades.

“After creating $400 billion in cash out of thin air since 2020, Canada’s inflation rate has hit a 30-year high, and housing inflation is hitting all-time records,” Poilievre said. “Choice and competition can give Canadians better money and financial products. Not only that, but it can also let Canadians opt out of inflation, with the ability to opt in to cryptocurrencies.”

Poilievre has pledged that no such ban would occur in Canada if he is elected prime minister.

At an afternoon photo op, Poilievre bought shawarma from Tahini’s, a London-based company that has poured its profits into bitcoin to fund aggressive growth.

Last month, the Canadian government placed sanctions on 34 cryptocurrency wallets it said were connected to the Freedom Convoy protests in Ottawa.

Convoy organizers actively solicited bitcoin donations after the government froze hundreds of convoy-affiliated bank accounts and sought a court order prohibiting the use of money donated to the convoy’s crowdfunding campaigns.

Poilievre didn’t mention the convoy or the Emergencies Act in his statement but did speak about the importance of a “decentralized, bottom-up economy.”

Conservatives will elect their new leader in September.