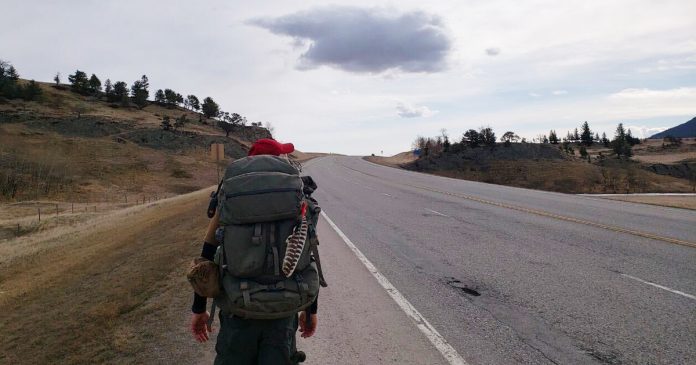 Canadian Armed Forces veteran (CAF) James Topp crossed into Alberta from British Columbia via the Crowsnest Pass this week, completing the first 1000km of his protest march to Ottawa and putting most of his journey’s mountains behind him.

Speaking outside of Frank, Alberta on Monday, Topp said he and his team planned to reach the hamlet of Monarch 112km away on Apr. 1 for a barn dance.

“We’re going to show up at 4pm, where there’ll literally be a dog and pony show,” he said. “Hope to see you there on April 1. This is not an April Fool’s joke.”

Topp also told True North via text message that his body was feeling good coming out of the first quarter of his journey and that he planned to release a special video within the next few days commemorating the completion of 1000km.Monday marked day 37 of Topp’s march from Vancouver to Ottawa to protest overbearing government mandates under COVID-19.  He launched his approximately 4200km journey from the Terry Fox monument at B.C. Place in Vancouver on Feb. 20 and plans to reach the Tomb of the Unknown Soldier in the nation’s capital in June.

Topp’s following has grown rapidly over the past month, with frequent daily updates posted to his social media channels – including Facebook, Twitter and Instagram – as well as a live GPS on his website Canadamarches.ca showing his progress at all times.

After reaching out to influencers in a video, Topp has also begun performing hours-long livestream interviews during his march with social media personalities, including on David Freiheit’s Viva Frei YouTube channel on Mar. 22. Topp said he also hopes to speak with others during his march, including Laura-Lynn Tyler-Thompson and Jordan Peterson.

Topp’s website now also includes a template letter to MPs, with an encouragement that supporters send it to their local representatives. In it, Topp itemizes the reasons for his march, encouraging officials to meet him at the National War Memorial in Ottawa on Jun. 22 for “a public discourse.” He adds, “this public discourse is being assembled to resolve how best to repair and unite Canadians after 2+ years of mandates.”

In the letter, he declares the reasons for his protest as:

Topp’s route along the Crowsnest Highway has taken his team through several small but historic communities including Greenwood, Yahk and Frank – the latter of which in 1903 saw the most massive and deadly landslide in Canadian history.

Most of Topp’s march has been completed in straight legs of 40-50km, although some of the more treacherous sections – including on the Hope-Princeton highway and Kootenay Pass – saw the crew repeat equivalent distances on safer stretches of road.

He said he is grateful for all the support he has received from people offering homes and meals to his crew along the way.