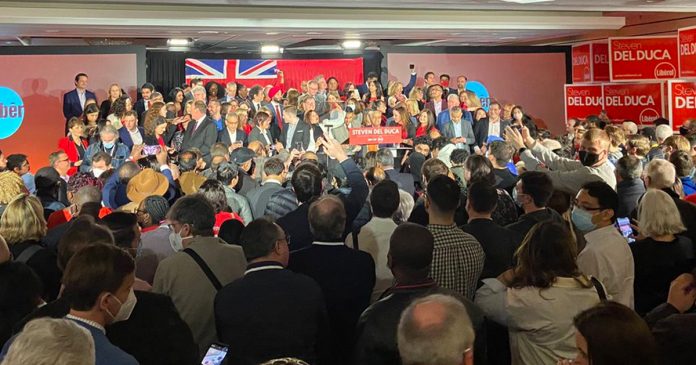 Del Duca held the rally on Saturday afternoon in Toronto, where he gave a keynote address ahead of the start of the 2022 Ontario General Election campaign.

The Liberals also unveiled their new logo and their “Plan for Economic Dignity,” which includes a $16 minimum wage, working towards a four-day work week and banning “underpaid gig and contract work.”

Attendees at the Liberal rally were not socially distanced, and many were not masked. This included the MPPs and candidates standing directly behind Del Duca.

Ontario lifted all capacity limits on Mar. 1, and its indoor mask mandate for most settings on Mar. 21, Face coverings are now only required for public transit, healthcare facilities, long-term care and retirement homes and homeless shelters.

After photos of the rally emerged, many people took to social media to criticize the Liberals for hosting a large indoor maskless rally — especially given that Del Duca had previously called on kids in schools to remain masked.

“I side with Ontario’s top children’s health experts who urged Doug Ford that ‘now is not the time’ to lift the masking requirements in schools…” said Del Duca on Mar. 9.

He added, “I simply do not accept the argument that our kids’ schools are not higher-risk areas and essential, and the experts agree. We must wait a couple more weeks to make sure our kids will be safe.”

The Liberal leader also said that his party “will make the necessary investments to make sure our kids’ classrooms are safe and ready for next September.”

Del Duca’s pro-mask statements were echoed by other Liberals, including Nepean candidate Tyler Watt, who had also criticized Ford for planning to end mask mandates in hospitals and long-term care homes in April.

Watt, who works as an acute care registered nurse, was seen maskless behind Del Duca while the Liberal leader gave his speech.

London North Centre candidate Kate Graham, who previously said she would continue wearing a mask after the end of the mandate to protect kids and vulnerable people, was also maskless.

Graham directly responded to True North’s Andrew Lawton (who called her out) by saying, “Yep. I screwed up here.”

In another tweet, Graham said, “I wish I wore my mask more consistently yesterday. Learning from this.”

Outrage over a lack of masking is likely not what the Ontario Liberal Party was hoping would come out of their first major in-person event since Mar. 2020.

It is, however, not the first time that Liberals have been caught flouting their own advice when it comes to public health measures.

Back in June, Prime Minister Justin Trudeau travelled to Europe for a G7, NATO and Canada-European Union summit despite not being fully vaccinated and the Public Health Agency of Canada advising against all non-essential travel.

While in the United Kingdom, Trudeau could be seen partying with other world leaders despite parts of Canada still being under lockdown.

Trudeau was also photographed maskless in the Netherlands in Oct. 2021 while Canadians were living under mask mandates and other public health restrictions.

The Ontario election is expected to happen on Jun. 2. According to polls, Premier Doug Ford and his PC Party are expected to win another majority government.

Del Duca, who lost his seat in 2018, will run against Associate Minister of Mental Health and Addictions Micheal Tibolo in Vaughan Woodbridge. According to 338 Canada, the PCs have a slight lead in the riding.