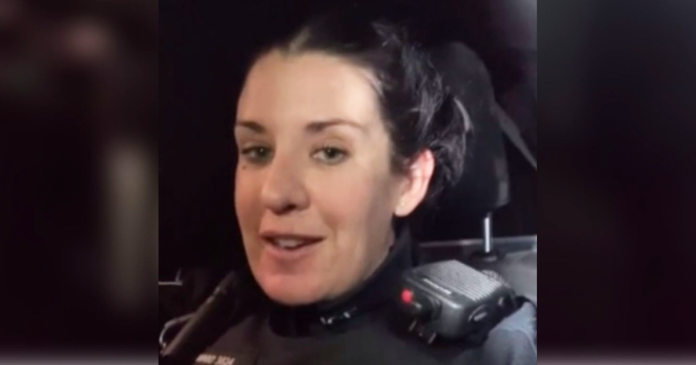 A Durham police officer who posted a video of herself speaking in support of the Freedom Convoy as it headed towards Ottawa is now facing charges under Ontario’s Police Services Act.

Durham Regional Police Service (DRPS) had originally announced they were investigating Constable Erin Howard in January after she posted the 1-minute video to a now-deactivated Twitter account.

DRPS spokesperson Chris Bovie confirmed to True North on Tuesday that Howard is now charged under the Police Services Act with two counts each of discreditable conduct, insubordination and breach of confidence.

Howard appeared in full uniform in the video on Jan. 24, the same day the Freedom Convoy’s western fleet headed through Alberta. In it, she called the truckers “true heroes” and said she would be in Ottawa to speak when they arrived.

“I’m just – I really wanted to give a shout-out to all the truckers. I think what you guys are doing is incredible. You’re fighting for rights and freedoms. And right now, it feels like we’re a little bit at war, and those rights and freedoms are at stake. So, you guys are honestly true heroes. What you’re doing is just incredible. I will be in Ottawa when you guys roll in. I’m going to be speaking on behalf of Police on Guard. And we are thrilled – thrilled and honoured – to be able to be there. I can’t wait to meet you guys. Hope to talk to a lot of you in person. Anyway, just wanted to give you guys a shout-out and some support, and keep rolling, and we’ll see you in Ottawa.”

It is not clear whether Howard spoke in Ottawa on behalf of Police on Guard, although the organization issued a statement on Feb. 25 in support of the officer. True North reached out to Police on Guard for comment on Howard’s charges but did not receive a response by publication time.

A DRPS spokesperson said in January that Durham police’s code of conduct “restricts the use of police property and influence to only official duties,” and suggested that the issue with Howard’s video wasn’t necessarily her opinion but rather the fact that she had appeared in uniform.

With her charges, Howard becomes the latest police officer to face punishment or investigation for supporting the convoy protests.

In February, two Edmonton Police Service (EPS) officers were forced onto leave without pay as they awaited the results of ongoing professional standards investigations. EPS Constable Elena Golysheva and Staff Sgt. Rick Abbott both spoke at a rally in Coutts, Alta. on Feb. 12.

Abbott had identified himself as a police officer before speaking, although he did not name his agency. Golysheva had also posted an emotional video of herself in full uniform to social media a few days earlier, pleading with Canadians to recognize what was happening to them.

“My heart has been broken every day when I saw the very freedom that I moved to Canada for has been taken away, and people – Canadians – who lived here or work here were not recognizing that,” Golysheva said, breaking into tears.

Addressing the officers’ suspension, EPS chief Dale McFee said the service could not “support or condone” their actions. “Like, that’s just not something that’s allowed in how we actually do our police work, and we have a discipline process for that,” he said.

Calgary police officer Nick Motycka also spoke out publicly in February, posting a video after watching Ottawa police confiscate fuel from protesters. Calgary Police Service confirmed to True North that the matter was being investigated but said Motycka – who did not appear in the video in uniform – was “currently on an unrelated leave from the service.”

In addition to supporting freedom protests, many police officers have also spoken out against vaccination mandates specifically. Freedom Convoy co-organizer Daniel Bulford – a former RCMP officer with the Prime Minister’s sniper detail – was put on unpaid leave last year for refusing to comply with the policy.

Durham police, unlike the vast majority of Canadian police services, does not require its officers to be vaccinated against COVID-19, but allows rapid testing as an alternative.

Howard is scheduled for her first appearance on May 5.

DRPS told True North that while Section 95 of Ontario’s Police Act prohibits the revelation of details about investigations arising from conduct complaints and investigations – including outcomes – Howard’s hearing will be public, and the details of her first appearances will be posted on the service’s website.

DRPS also confirmed that its officers “did provide support to Ottawa Police and the citizens of Ottawa” during the final weekend of the Freedom Convoy protests.