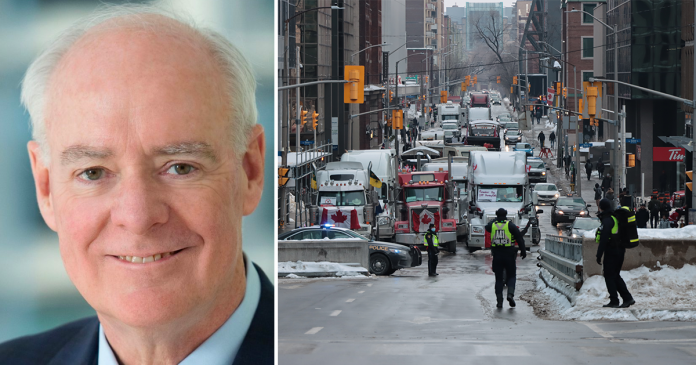 The former cabinet minister who wrote the Emergencies Act in 1988 has questioned whether the requirements for its invocation were met after Prime Minister Justin Trudeau used the extraordinary measure to quash Freedom Convoy protests in February.

According to Blacklock’s Reporter, former cabinet minister Perrin Beatty made the comments on Tuesday while testifying before a joint parliamentary committee investigating the use of the act.

“Emergencies legislation is designed to be legislation of last resort. “It’s explicit on that. It is designed to be used when there is no other legal authority available,” said Beatty. “Ask how we got to this point. The police were called upon to deal with a breakdown in our political system. We can criticize how they did their job but it should have never been necessary for them to fill the breach in the first place.”

Beatty added that since the law was triggered by Trudeau it could now become easy to invoke once again to curtail civil liberties even further.

“Now that it has been used it becomes easier to invoke. You must not define down the threshold at which extraordinary powers are used to curtail civil liberties,” said Beatty. “That it made law enforcement easier is clear. However the issue is whether the deliberately high threshold was met, not whether the powers given were useful.”

“I hoped there would never be a need. I did not expect to have it invoked in my lifetime,” he continued.

Several earlier testimonies from prominent government and private industry figures have poked holes in the Liberal government’s narrative around the Freedom Convoy.

Most recently, Ottawa Police interim chief Steve Bell told the Commons public safety committee that no illegal firearms were discovered among convoy participants despite claims by the media and government officials that loaded weapons were on the scene.

Other key testimonies have disputed claims that the convoy received terrorist or foreign financing and that foreign extremists were involved in organizing the protest.

After invoking the Emergencies Act on Feb. 14, the Trudeau government enabled banks to seize nearly $8 million in funds from protest participants and organizers by applying terrorist and money laundering financing powers.