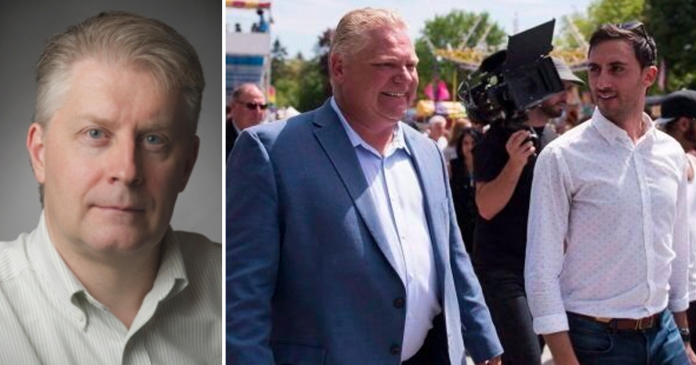 Ross McKitrick is Professor of Economics at the University of Guelph and a Senior Fellow of the Fraser Institute. He has provided True North with a copy of a letter he sent to the Ontario government on Mar. 29; we have published that letter here in full.

Bill C-67, Racial Equity in the Education System Act, 2022, has passed second reading in the Ontario legislature and is now under review by the Standing Committee on Social Policy.

Bill C-67 seeks to amend various Acts with respect to “racial equity,” including Ontario’s Education Act, the Ministry of Training, Colleges and Universities Act and the Ontario College of Teachers Act. The bill would, among other measures, mandate “anti-racism and racial equity training” for teachers, as well as “fines for persons who disrupt or attempt to disrupt proceedings of a school or class through the use of racist language or activities.”

I write to express my deep opposition to Ontario Bill 67, the education sector anti-racism Bill. The problem is not the intent to teach about the complex history of race relations and cultivate non-racist attitudes. We want that in our schools. The problem is that the legislation privileges and mandates adherence to one side of a very complex and divisive battle over how to accomplish the goal. The Act creates an institutional structure that will suppress the very debates and discussions it seeks to encourage.

We are unanimous in Canadian society in opposing racism. Canada did not invent racism but we have done more than pretty much any nation on Earth to eradicate it. We share Dr. Martin Luther King Jr’s dream of a world in which someone is judged on the content of his or her character, not the colour of his or her skin. That, traditionally, is what it has meant to be anti-racist.

We do not need new legislation to embed those ideals in our educational system—they are already there, and to the extent they need re-upping, school boards and school staff have all the tools necessary to do so. Every university has human rights staff who monitor campus activities for signs of racism and intervene swiftly if it is detected. And we have courts and Human Rights Tribunals to provide legal enforcement of charter guarantees against racial discrimination.

Bill 67 does something different. It embeds into our educational system “anti-racism,” which is a euphemism for a new and controversial school of thought associated with Critical Race Theory (CRT). Enshrining it in law imposes its dominance in the curriculum and governance of our schools before people have had a chance to properly assess it. Many US states have had experience with CRT in the education system over the past few years and are now struggling with the resulting acrimony because of its divisive, accusatory and demoralizing content.

It is not traditional civics education aimed at creating colour-blind citizens. Underneath the benign euphemisms of “equity” and “anti-racism” is a philosophy that has caused chaos and resentment wherever it gets embedded. Until you have been made to sit through mandatory anti-racism training you won’t really appreciate its problems. It works off a premise that racism is a permanent and immutable feature of society and everyone is inherently either an oppressor or a victim by virtue of skin colour. Specifically, non-whites are victims and whites are privileged oppressors. Anti-racism education doesn’t aim to get people to ignore skin colour. Instead, it aims to make skin colour the overriding consideration in all social situations.

Before proceeding, if an MPP objects that this isn’t the intent of the legislation and I am overreacting, my response is, if so, please propose an amendment to the Bill specifically forbidding the teaching in Ontario schools of doctrines that single out any one race or ethnicity as being uniquely prone to racism more than any other, or that espouse any concept of collective guilt on the basis of race. The reaction of the proponents of the Bill will confirm my argument.

“Anti-racism training” singles out people in targeted categories for an accusation of bias and bigotry. The various ways that an accused person might try to refute such an accusation are then interpreted as symptoms of being in denial about one’s culpability for systemic racism. It becomes thereby a circular, self-sealing system that can’t be debated through the ordinary processes of testing hypotheses against evidence.

According to the theory and the text of the legislation, bias can be conscious or subconscious, so the fact that someone has never acted in an overtly racist way has no bearing on one’s guilt. Disputing an accusation of bias would be tantamount to expressing hostility to anti-racist efforts which according to the Bill is a form of racism. Once people are caught in this Kafka-esque nightmare, faced with a demoralizing accusation that could lead to public ruin and termination of employment, and with no way to defend oneself, the only way out is to confess your crimes, denounce yourself and your heritage, and commit oneself more deeply to the cause.

This is the toxic politics that played out in Maoist China during the cultural revolution and during the worst years of the Soviet Union. Back then the categories were bourgeoisie and proletariat. If you were born into the bourgeois class you were an oppressor of the workers regardless of how you conducted your life, and the only way to avoid being convicted of counter-revolutionary crimes was to denounce your family and class and demonstrate through public affirmations your fanatical devotion to the state ideology.

Bill 67 is filled with undefined terms whose ambiguity will create openings for the most ideological backers of this movement to push through an increasingly strident agenda. “Anti-racism” is defined as opposition to racism, which is defined as racism against non-whites, Jews and Muslims, which by process of elimination singles out white, heterosexual males as the main perpetrators. The very foundation of the bill thus makes a race-based generalization.

The Bill repeatedly uses the word “equity” to describe the intended outcome, without providing any definition, specifically by clarifying that a free society enshrines equality of opportunity but not a guarantee of equality of outcome. “Equity” is shorthand in many quarters for equality of outcome. More specifically, superficial evidence of unequal outcomes is cited in anti-bias training as proof of systemic inequity, without any evidence being provided that individuals were not given equal opportunities. Since the Bill fails to define “equity” the activists behind it, who by regulatory mandate are to become the controllers of its quasi-judicial procedures, will be free to read in a definition that pushes the whole system in their preferred direction.

The Bill mandates that teachers will be assessed in their work based on “competencies related to a teacher’s anti-racism awareness and the teacher’s efforts to promote racial equity.” None of this is defined. How can teachers be assessed on their personal “awareness”, which is a subjective state of mind? What would happen to a teacher whose “awareness” of the anti-racism movement led him or her to introduce lessons using material from black anti-CRT scholars like Glenn Lourie or John McWhorter? Or who pushes back against material that he or she believes is unfairly accusatory or demoralizing for Caucasian students? Such a teacher could, under this legislation, be severely sanctioned without recourse. In practice teachers will end up being coerced to outdo one another in signaling their ideological commitment to the agenda behind the bill, since any hesitation on a teacher’s part could be interpreted as insufficient “awareness” and inadequate “efforts to promote racial equity.”

Section 7.1.1 commands the Minister to establish procedures to deal with accusations of racist behaviour. Nowhere in that list is there any provision for due process to protect the rights of accused persons. The entire apparatus is based on the supposition that a reported incident of racism actually took place, the victim must be protected and the guilty parties must be punished. The legislation removes any discretion of the Minister by replacing “may establish” with “shall establish”.

The Act also enshrines new supervisory mechanisms that require annual “anti-racist” education sessions for all teachers, with oversight mechanisms that will sniff out any sign of resistance no matter how extreme, one-sided and inaccurate the material is. The legislation embeds requirements to turn both the training and the quasi-judicial oversight functions over to people with specific expertise in “anti-racism” without defining what that even means. The danger is that it will be used to create a tight guild of strident activists whose qualifications consist primarily of being in alignment with the movement’s ideology, who will under this bill acquire authority over the whole education system including the university sector. They will get to dictate not only curriculum content and the content of mandatory annual indoctrination sessions of teachers but they will be able to demand complete acquiescence to its content based on the threat of finding any dissenters guilty of insufficient “awareness” and inadequate commitment to “efforts to promote racial equity.” The Bill makes no provision for due process or rights of appeal, not that those would help since the crimes being described are subjective and are based on the arbitrary opinion of partisan observers.

How might a teacher, once accused of racism, defend himself or herself when the CRT ideology deftly turns any claims of innocence into further proof of guilt? Under the doctrine of “interest convergence” even past support of anti-racist movements can be interpreted as evidence of wanting to conceal one’s underlying subconscious racism.

Teachers who, in good faith, resist bringing materials into their classroom that they feel denigrates or singles out white students could reasonably fear accusations and proceedings that will subject them to extreme emotional, financial and career duress. Teachers and parents will to some extent go along with the whole agenda simply out of fear, but coercion breeds resentment and backlash, as has been seen in the US. Under the Bill’s monitoring and reporting rules the most stridently ideological staff within a school will be turned into snitches. Some will even relish the power this bill gives them over the colleagues, to the detriment of collegiality.

A mistake that needs to be fixed

On a political note, the Bill should have been called the Act to Put Radical Leftists in Charge of Education in Ontario. Bill 67 is poorly-written, misguided in intent and dangerous in its implications. It will do great harm our public educational system and will not accomplish what it sets out to do. For the sake of Ontario’s future please kill this bill.

Poynter – What is critical race theory, and why are conservatives blocking it?

Thoughtco – What Is Critical Race Theory? Definition, Principles, and Applications

Christopher Rufo – Critical Race Theory: What It Is and How to Fight It