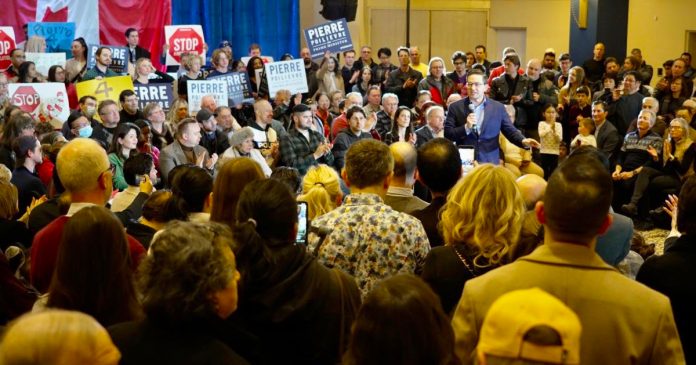 Conservative leadership candidate Pierre Poilievre is crossing the country, and his campaign rallies have been drawing huge crowds.

Around 1000 people attended a rally in Lindsay Ont. on Sunday to hear Poilievre speak, filling the venue to capacity.

Joining Poilievre was Conservative MP for Peterborough Kawartha Michelle Ferreri, who announced she was endorsing Poilievre for the party’s leadership.

Poilievre has travelled across Canada in recent weeks, meeting with Conservative Party members and other supporters. His events have attracted large numbers of attendees – a rare sight for leadership events in Canada.

“I’ve been covering leadership races, provincial and federal elections for nearly 20 years. The crowds Pierre Poilievre is attracting to his rallies — they’re off the charts, folks,” Akin tweeted.

“Do his opponents in (the Conservative leadership race), let alone his (Liberal and NDP) opponents have an answer to this?”

The sizes of the gatherings even prompted one former Liberal MP to accuse Poilievre’s campaign of photoshopping attendees to make the rallies look bigger than they were.

Ballots for the leadership race will be sent to Conservative Party members in the summer, and a new leader will be announced on Sept. 10.

Poilievre has made several major policy announcements since declaring his bid to become Conservative leader. These include a plan to scrap the federal carbon tax and another to ban overseas foreign oil imports within five years of being elected Prime Minister of Canada.

On Saturday, the Carleton MP announced he would also “unlock the potential of Canada’s Arctic Ports and get Canadian oil moving through the Port of Churchill in Manitoba.”

In addition, he has committed to repealing Bills C-48 and C-69, which critics argue have stifled Canada’s energy sector.