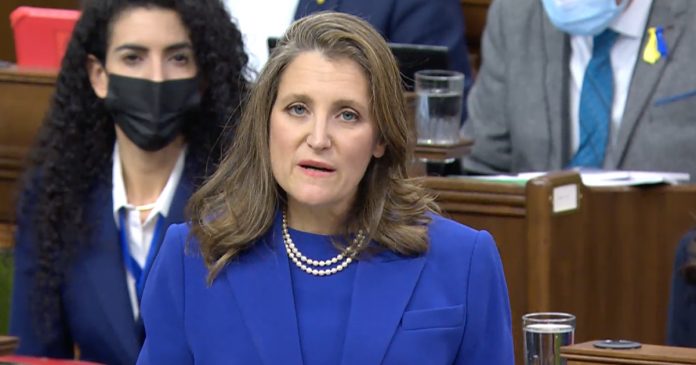 The Trudeau government is set to continue its massive spending spree, with the federal budget revealing $56 billion in new costs and programs.

Liberal Deputy Prime Minister and Finance Minister Chrystia Freeland announced the additional spending on Thursday when tabling the document in the House of Commons.

The new spending includes $8 billion on defence, $10 billion towards an affordable housing plan and further taxes on financial institutions. The Liberals have also raised a surtax on earning over $1 billion by1.5%, bringing it to 16.5%.

The Liberals plan on boosting defence spending over a five-year period. Much of the new money will go towards upgrading the North American Aerospace Defence Command and buying more weapons to supply Ukraine to fend off the Russian invasion.

Although a significant investment, the funds will not be enough to meet the NATO threshold of 2% of GDP.

Despite housing being a provincial jurisdiction, the federal Liberals also announced they would be spending $4 billion to build 100,000 new homes in urban areas by 2025, while dishing out $2.7 billion for low-cost and co-op housing.

Federal deficit forecasts projected a whopping $113.8 billion for 2021-2022. However, the Liberals claim that by next year they will be able to cut the deficit by over half and bring it to $52.8 billion with the eventual goal of an $8.4 billion deficit by 2027.

“We are absolutely determined that our debt to GDP ratio must continue to decline,” said Freeland. “The extraordinary debts we incurred to keep Canadians safe and solvent must be paid down.”

In a rare moment of transparency, Freeland acknowledged that Canada was lagging behind other developed countries in terms of economic productivity.

“So now is the time to focus – with smart investments and a clarity of purpose on growing our economy,” said Freeland.

Canadians will also see a new tax-free savings account allowing first-time home buyers to save up to $40,000 as well as a rent-to-own program.

Before the budget was unveiled, Conservative leader Candice Bergen blasted the new spending as irresponsible.

Other critics including the Canadian Taxpayers Federation (CTF) slammed Freeland for failing to rein in spending.

“Freeland is giving taxpayers another credit card budget with no plan to pay the bills on time and chip away at the $1-trillion debt,” said CTF Federal Director Franco Terrazzano.

Trudeau also plans to give more money to green energy companies, and to attempt to boost economic growth through a small-business tax cut. In order to cut down carbon emissions, a new tax incentive program was revealed for oil and gas companies to invest in carbon capture technology.

Ottawa will implement a $15-billion Canada Growth Fund to lure more investment from home and abroad into the green industry.  Additionally, the Liberals will devote $3.8 billion to develop a national critical mineral strategy.

Incentives were also revealed for Canadians and businesses to adopt electric vehicles.

Next year, the program will also include seniors and people with disabilities.