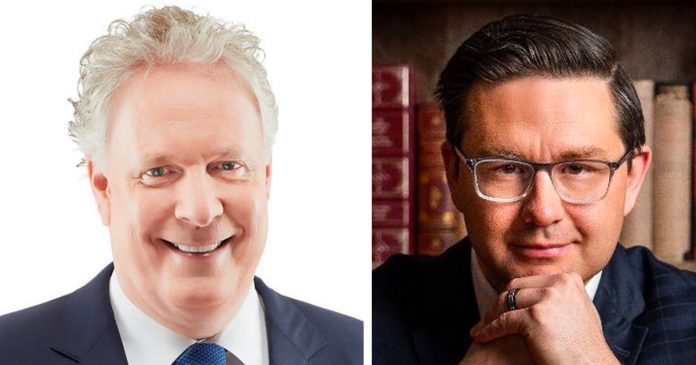 Charest accused Poilievre of backing “people breaking the laws” and alleged that his support for freedom demonstrators disqualifies him from being prime minister.

“I have a competitor by the name of Mr. Poilievre who supported, as you know, the blockade. And if you want to be a leader in this country and a legislator, you can’t make laws and break laws,” Charest told CTV News.

“Laws are not a buffet table, if you’re a legislator, from which you choose what you want. Because what you’re really saying to people is, I’m above the law. You can’t be a leader of a party and the chief legislator of the country, as prime minister, and support people breaking the laws. That disqualifies you.”

Poilievre has frequently spoken in support of the protest movement.   He has not, however, expressed any support for blockades.

“Just talked with hundreds of cheerful, peaceful, salt-of-the-earth, give-you-the-shirt-off-their-back Canadians at the trucker protest. They choose freedom over fear,” tweeted Poilievre on Jan. 31.

On Friday afternoon, Poilievre released a political ad going after Charest accusing him of repeating “Liberal lies about truckers.”

“Jean Charest is a Liberal. As Liberal premier he raised the sales tax by 2%. He brought in a carbon tax and supported the billion dollar long-gun registry. He even said the Liberal Party was “our party” and while the Chinese government detained kidnapped Canadians, Charest was a paid consultant for Huawei on the Meng Wanzhou case and helping it participate in Canada’s 5G networks,” the ad claimed.

Charest went on to claim that he was the “underdog” in the 2022 Conservative leadership race and accused other candidates of engaging in “American-style politics.”

“I’m the underdog in this race. And you know what? I’ve been the underdog all my life. So I don’t mind being there, it’s a place I recognize,” said Charest.

“Either we are going to go down the route of American-style politics, of wedge politics, and attacks, that we are actually seeing in this leadership race. Or we’re going to be a Canadian Conservative party, which is what I believe in.”

Fellow MP Chris Warkentin came to the defence of his colleague Poilievre, calling Charest “an apologist for Trudeau.”

“He won’t fight restrictions on Canadians’ freedom, as long as Trudeau makes it illegal?!? We need a leader who will fight for liberty…not an apologist for Trudeau,” tweeted Warkentin.

Prime Minister Justin Trudeau declared the Freedom Convoy protests illegal in February before invoking the Emergencies Act both to end the demonstrations and freeze the financial accounts of their supporters.