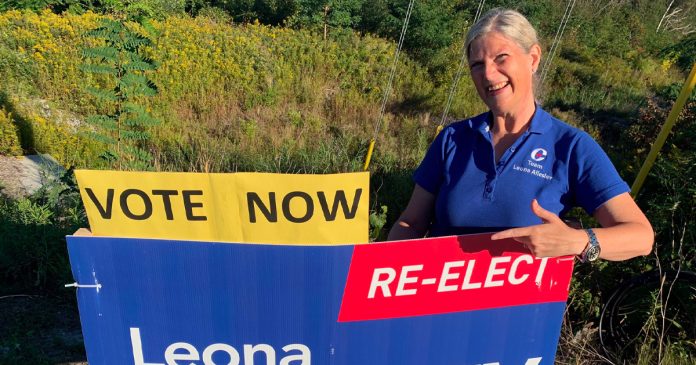 Former MP Leona Alleslev has officially launched her bid to become the next leader of the Conservative Party of Canada.

Originally elected as a Liberal in 2015, Alleslev crossed the floor to join the Conservatives in 2018, where she was made deputy Opposition leader by Andrew Scheer. After being re-elected as a Conservative in 2019, she was narrowly defeated in her Greater Toronto Area riding of Aurora–Oak Ridges–Richmond Hill in 2021.

Alleslev held a news conference at Parliament Hill on Wednesday to make her announcement.

“Simply because I chose to wait until now to announce doesn’t mean that I haven’t been doing all of the work that the other candidates have been doing. I am not behind,” said Alleslev.

Candidates hoping to be on the leadership ballot have until Apr. 29 to get all of the required signatures and pay the $300,000 entry fee.

Alleslev touted her decision to cross the floor in 2019 from the Liberals to the Conservatives as a reason people should support her. Alleslev said that it was a decision she made because of her conservative principles.

“In order for (Conservatives) to be successful in an election, to win a majority government, we need a lot of other people to make the same choice that I did,” said Alleslev.

Alleslev will be running against Pierre Poilievre, Jean Charest, Leslyn Lewis and others to become the next leader of the party.

The CPC has stated that it expects to have a new leader elected by September of this year.

Prior to her official announcement Alleslev had set up a CPC leadership website.

“Canada is being led by the weakest, least competent prime minister of our lifetimes. At the same moment our country faces critical issues at home and global turmoil around the world. Canada is not playing the role it should on the world stage. And yet, we have lost three straight federal elections to Justin Trudeau,” the website claims.

“We need a strong Conservative Party to defeat this Liberal government and get our country moving in the right direction again. Leona Alleslev is the leader who can get this critical mission done.”

It goes on to tout Alleslev’s experience as an officer in Canada’s Air Force and her past work in the private sector.