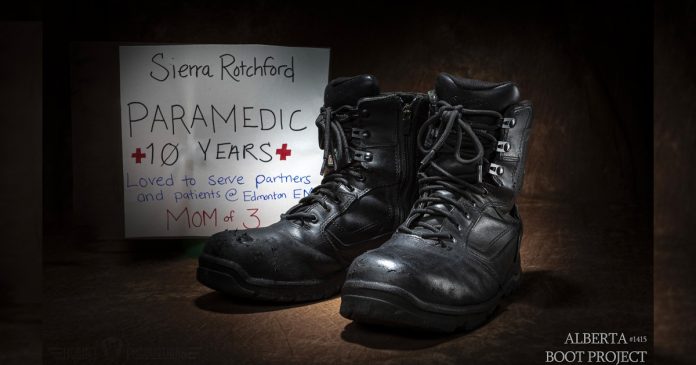 A campaign launched by Alberta healthcare workers last year to show the human toll of the province’s vaccine mandates set up its final display in Red Deer on Saturday, with organizers vowing political action for years.

The Alberta Boot Project began in December after thousands of healthcare workers were forced onto unpaid leave by the province’s vaccine mandate. The project’s organizers collected close to one thousand pairs of boots and shoes – from affected nurses, doctors, paramedics, firefighters and other frontline professionals – and displayed them with signs detailing how long their owners had served.

The project set up displays at the Edmonton legislature and at the Peace Bridge in Calgary, with plans at the time to cross the province.

With Alberta Health Services (AHS) allowing rapid testing in December and then finally dropping the vaccine mandates in March – at least, for workers already hired – the Alberta Boot Project’s organizers decided last month that it would put on one last display before donating the remaining boots to charity.

The hundreds of pairs of shoes and boots lined the roadside at 127 Poplar Ridge Road in Red Deer on Saturday, with the display followed by a tailgate party nearby.

“We are SO incredibly thankful for each and every one of you, and for the community of likeminded people who have stood together through the ups and downs of the past few chaotic years,” organizers stated on a Facebook post.

Organizer Sierra Rotchford told True North on Friday that around half of those who had donated the approximately 800 pairs of boots had gone back to work but that there was a large number who were either never going back, or who – as employees of contractors to AHS – had been terminated.

Rotchford, an Edmonton paramedic, said she would be returning to work next week. She described her own experiences with the vaccine mandate, where despite ongoing complications from a recent surgery – including major sepsis – she was unable to get a medical exemption.

She said she otherwise had no issues with the vaccine, but believed in people’s right to choose it for themselves.

“I thought okay, no big deal,” she said. “I have a legitimate health condition. I ended up talking to my doctor, who said that they were not allowed to write the medical exemption because being at risk of myocarditis is not an exemption criterion, only having an active case of myocarditis is. So, I ended up not bothering with going through the medical exemption process with AHS because it’s just more work when the doctor is not allowed to approve it.”

Rotchford said she then exhausted herself working double the number of shifts to bank as much money as possible before the vaccination deadline. She said she ended up being put on unpaid leave after her doctor’s note for medical leave was dismissed.

“They thought I was just escaping the mandate,” she told True North. “And so, they delayed the whole process.”

Rotchford said that the experience has awakened her and thousands of healthcare workers who were politically passive beforehand. She said that 15,000 of them would be voting Jason Kenney out as leader of the UCP this weekend and that they would be looking forward to overhauls of the AHS board and making the health unions answerable for not standing up for their members.

Recognizing that the Alberta Boot Project represents one of the very few success stories in the fights against vaccine mandates in Canada, Rotchford urged healthcare workers in other provinces to band together.

“My one piece of advice is to find each other, to connect with like-minded educated people who are willing to show the truth in the most basic form, which is that we as healthcare professionals go into that profession knowing to do no harm, to have compassion and to have no judgment when we’re treating our patients,” she said. “And so, when you steward your profession, and then this happens to you, you steward the truth the same way.”

She warned, however, that there was no going back after a political awakening.

“It’s going to cost you time, and it’s going to change you for the rest of your life,” she said. “I want to go back sometimes and be like, ‘I’m just going to go back to worrying about which detergent is on sale,’ but instead now, it’s like, okay, no.”

“The long-term plan is, get involved.”