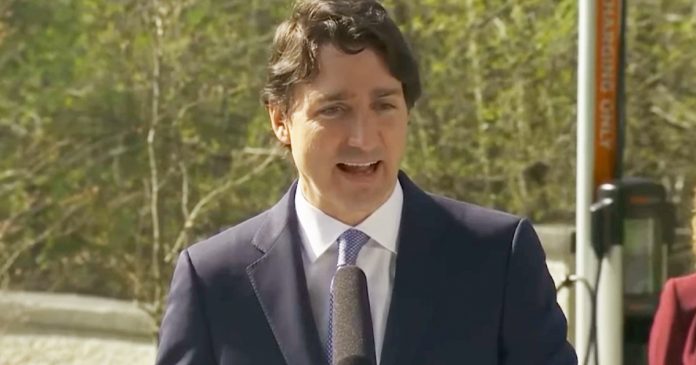 At a press conference in Victoria, British Columbia on Monday, Prime Minister Justin Trudeau praised the right of Canadians to protest, saying he encourages people to express their disagreements with the government.

Trudeau made the comment in response to a question from reporters following an announcement highlighting the Liberal government’s 2022 budget spending on electric vehicles and infrastructure.

“There’s an expectation that there will be protesters this afternoon at City Hall,” a reporter asked. “The mask mandates and vaccine mandates are essentially over, and yet there remains this cultural divide, if you will call it. What would you say to those protesters today?” asked the reporter.

“First of all, I don’t know if this is a good thing but I can’t remember a trip to Victoria City Hall in which there weren’t a few people expressing their concerns about some issue or other,” said Trudeau “It’s really important that Canadians continue to be able to come out and express their views, express their disagreements with (the) government.”

“Protests should always be legal. They should be legal in a safe and responsible way and that’s exactly what we’re going to encourage. “I’m looking forward to seeing what’s on people’s minds as I go to meet the mayor and see people at City Hall.”

Prior to Trudeau’s arrival, Victoria’s Police Department (VicPD) installed a number of CCTV cameras throughout the city’s downtown to ensure the prime minister’s safety.

“We are deploying these temporarily placed, monitored cameras in public spaces in accordance with BC and national privacy legislation,” announced VicPD. “Temporary signs are posted to ensure that those in the area are aware.”

Trudeau’s comments were in stark contrast to how he treated Freedom Convoy protesters in Ottawa this February.

In response to demonstrations against COVID-19 mandates by truckers, the Liberal government declared the protests illegal. Soon after, Trudeau invoked the never-before-used Emergencies Act to empower a militarized police response against the demonstrators and to have banks freeze their assets for attending the protest.

Despite claims by the legacy media, several mandates continue to remain in place, including a travel ban on unvaccinated Canadians. People who are not fully vaccinated against COVID-19 can’t board a train or plane domestically and internationally.

Trudeau has been dogged by protesters not only in Canada but abroad as well. While visiting London, UK last month, a group of freedom protesters waited outside of 10 Downing Street to protest the prime minister’s presence.

Trudeau reportedly used an alternate entrance to avoid the demonstrations.