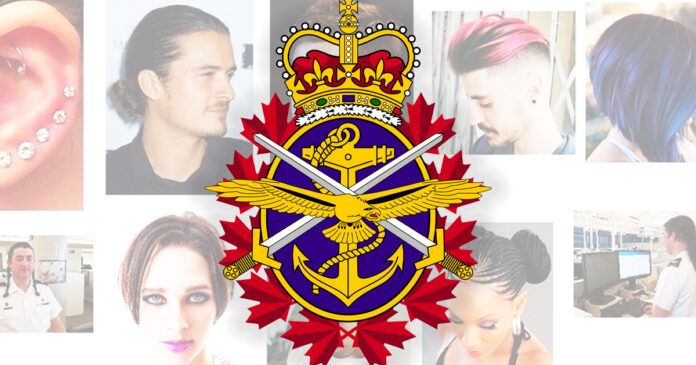 The plan purports to be “safe, operationally effective, inclusive and reflective of societal norms and expectations.”

If adopted there would be one standard guideline for all CAF members from recruitment to release.

On the issue of face tattoos, the CAF writes that “tattoos are permitted on the face as long as they conform to the regulations outlined in Section 2- Appearance.” The section prohibits members from having tattoos associated with criminal or hate groups.

Proposed changes on hair could include “no length restriction, no restrictions on colours and all styles of facial hair and sideburns (will be) authorized.”

“Yes, the colouring of hair is permitted in all orders of dress unless it inhibits an operational duty. For example, bright coloured hair may have a negative operational impact during field operations/training. Leaders are invited to discuss with their members (and) find a simple suitable accommodation, such as a scarf to cover the hair,” a FAQ portion of the presentation describes.

As for facial hair, “all styles of facial hair and sideburns” on men or women would be allowed should the draft plan be approved.

“Yes, all styles of facial hair and sideburns are authorized and shall comply with safety and operational requirements. Facial hair may be braided/pony tail style and coloured. Accessories to secure facial hair include but are not limited to: barrettes, bobby pins, fabric elastics, elastic bands, and hair nets,” the FAQ explains. “There are no restrictions on the length of hair. However, it must not prevent the proper wear of headdress and must not impede the visibility of the members face.”

However, soldiers could still be asked to shave their facial hair should a commander decide it doesn’t meet operational or safety standards.

With regard to being “permitted to have long fingernails in uniform,” the CAF writes that “fake nails and eyelashes (are) permitted, nail polish (is) permitted” and “permanent make up (will be) allowed.”

CAF members could also soon be allowed to wear jewelry, including rings and earrings.

“All may have earrings with adornment (no number restriction),” a proposed changes slide writes. “No restriction on numbers of rings worn.”

According to its implementation section, the proposed plan has received “endorsement from national leadership” and was approved by the National Defence Clothing and Dress Committee.

The plan is currently being reviewed before being passed onto Chief of Defence Staff Wayne Eyre. It could be implemented before the end of April 2022.