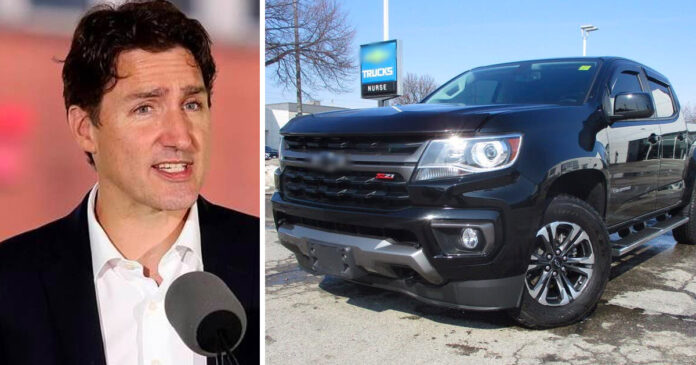 The Trudeau government is considering a recommendation to hit pickup trucks with a new tax that could cost Canadians between $1,000 and $4,000 per truck.

The Ministry of the Environment released a 271-page report that includes a recommendation to subject pickup trucks to a levy that varies from $1,000 on light-duty trucks to $4,000 on super-duty trucks.

Right now, the Green Levy applies to large SUVs and passenger vans that use more than 13 litres of fuel per 100km. Pickup trucks are expressly exempt from the current tax.

This new recommendation urges the Trudeau government to lift that exemption and to hit pickups with the tax.

The report was posted by the Ministry of the Environment on the Government of Canada website Mar. 31, 2022, titled 2030 Emissions Reductions Plan: Canada’s Next Steps for Clean Air and a Strong Economy.

It includes a foreword by Liberal environment minister Steven Guilbeault, who wrote, “(t)his is our ambitious and achievable roadmap to reach our emissions reduction targets.”

Speaking to True North, Canadian Taxpayers Federation (CTF) B.C. director Kris Sims pointed out how some professions require these types of trucks and that the tax would have a negative impact on those industries.

“It’s pretty tough to stuff plywood into a Prius and construction tools into a Tesla, so the Trudeau government should scrap these plans to hit trucks with a new tax,” said Kris Sims.

“If the minister wants to clarify and categorically reject a new tax on pickup trucks he should go ahead and do so, but this recommendation for a truck tax is in his ministry’s report in black-and-white, and Canadians have every right to be concerned about it,” Sims told True North.

Sims encouraged Canadians who oppose the proposed tax on trucks and SUVs to sign the CTF’s petition.

Trucks are used in various crucial industries, and the additional cost this may impose on businesses seeking to update their trucks affects getting products to shelves.

The Trudeau government did not announce this tax increase on trucks in any public announcement previous to the Mar. 31 report released by the Ministry of the Environment.

This truck tax comes as the Trudeau government imposes various levies on the Canadian people, including the Apr. 1 carbon tax increase, the tax increase on Canada’s financial sector, and the effects of inflation.