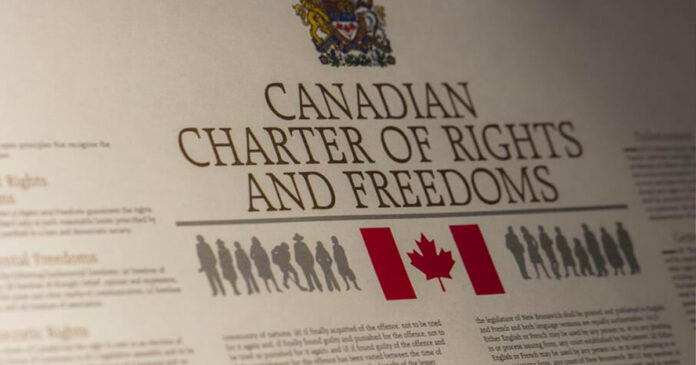 An Ottawa conference marking the 40th anniversary of the Charter of Rights and Freedoms saw a law professor lecture the government for not understanding “the very notion of freedom,” as well as an independent media journalist chastise a panel member for calling Freedom Convoy protesters “human slime.”

A half-hour into the conference, Blacklock’s Reporter’s Tom Korski asked why no one had discussed the government’s implementation of the Emergencies Act on Feb. 14.

“That seems an odd omission for this panel,” Korski said. “And I wondered why, Mr. Khan – I looked up your social media accounts – you described Freedom Convoy protesters as ‘human slime,’ – I’m quoting. You said that plaintiffs awaiting bail hearings charged with mischief ‘deserve to spend years in jail.’”

“You said any publicly funded employee including a nurse who donated a penny to the Freedom Convoy needs to be removed from their job. That was on February 16 – on your Twitter account – and you said any Conservative MP who supported protesters needs to be arrested. Mr. Khan, that’s a little bit rough coming from an advocate of the Charter of Rights and Freedoms.”

Replying that he didn’t remember using the term “human slime,” Khan proceeded to justify his assessment of the truckers using other pejorative labels.

“This was a protest organized by people with a known history of racism and white supremacy, Islamophobia, anti-semitism,” he said. “They allowed white supremacists and neo-Nazis to march around freely within the protests; they had no problem with that. And frankly, the politicians who stood by these protest organizers and enabled them – encouraged them, in my view – were committing sedition under the Criminal Code.”

Korski brought up the fact that the Canadian Civil Liberties Association (CCLA) and 15 civil rights groups were all seeking to hold the Trudeau government accountable.

Packer, a constitutional scholar, said that he welcomed the CCLA’s action and that not enough people – including in the government – understood the Constitution and its distinction from “the notion of a right to protest that absolutely does exist.”

“Its very core in human rights to rebel against excessive abuse of authority and so forth, as a result, or a combination of a number of freedoms – freedom of association, freedom of assembly, freedom of expression, freedom of movement – and understanding the relation of these and the very notion of freedom is something that clearly not enough Canadians understand, neither in our government nor in the public square.”

“I think it is extraordinary the Emergencies Act was invoked,” he concluded, calling it a “political reaction.”

“I do think it is very problematical. I actually welcome that it should be challenged. The courts should have some opportunity to say something about it. I think that’s essential in our democracy.”

Manitoba senator Marilou McPhedran added that there had been “a movement among a significant number of senators and MPs, including some Liberals, to come up with the requisite number of signatures to end the declaration (of the Emergencies Act).”

She said the government had been aware of the movement when Trudeau voluntarily revoked the act on Feb. 23.