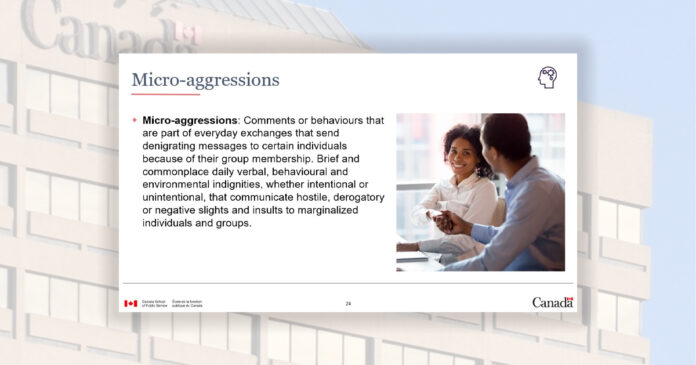 The Canada School of Public Service (CSPS) said in an “anti-racist” course for government employees that “colorblindness” or treating other ethnicities equally “is no longer acceptable,” and public service workers had to “undo racism in (their) minds.”

“We need to work to eradicate racism everywhere by developing our self-awareness, self-reflecting, and challenging our unconscious biases,” wrote the CSPS.

“We need to strive to undo racism in our minds, in our personal environments and in the world. We need to work towards equality for all. Silence is no longer an option, colorblindness strategy is no longer acceptable and we need to take action to enact change.”

The course was titled “Taking Action to Build an Anti-Racist Canadian Public Service.”

Another CSPS workshop instructed government employees to avoid “micro-aggressions” such as sarcasm, or checking their watch while in a conversation to avoid offending people from marginalized groups.

Micro-aggressions are defined as “comments or behaviours that are part of everyday exchanges that send denigrating messages to certain individuals because of their group membership. Brief and commonplace daily verbal, behavioural and environmental indignities, whether intentional or unintentional, that communicate hostile, derogatory or negative slights and insults to marginalized individuals or groups.”

Some examples of said micro-aggressions include the “use of sarcasm”, “comments that are belittling”, “body language such as rolling your eyes when someone talks”, and “looking at your watch while someone is talking to you” or having a “harsh tone of voice.”

The presentation also delved into “micro-inequities,” defined as “unconscious messages that devalue, discourage and impair” performance of individuals. They include not being invited to lunch with coworkers or having their ideas ignored.

Numerous CSPS initiatives and courses are being offered based on the far-left notion of “diversity, inclusivity and equity.”

Critics including renowned psychologist and author Dr. Jordan Peterson have slammed the concept and its associated practices as being destructive to society and its institutions.

“Diversity, Inclusivity and Equity — that radical leftist Trinity — is destroying us,” he wrote.