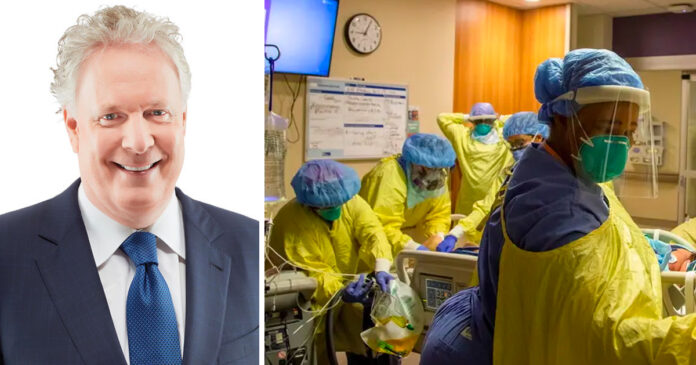 Jean Charest is a leadership candidate for the Conservative Party of Canada.

Our country’s healthcare system is cracking under its own weight. Seven years of big left-wing government, and a pandemic that allowed it to cement its grip over national healthcare policy and subject Canadians to lockdowns, have left us in a state of crisis.

In every category, from ICU and hospital beds per capita to doctors and nurses per capita, to wait times for basic procedures, Canada is near the bottom of Organisation for Economic Co-operation and Development (OECD) rankings, despite spending more than most countries who outperform us.

More empty promises, irresponsible spending or slogans are not the answer. What Canada needs is strong Conservative leadership to unleash healthcare reform and stop the downgrade spiral of degrading healthcare services.

We have politicians that have used this pandemic as an opportunity to exploit people’s real fears and anxieties as a reason to divide us. Canadians have the right to be frustrated with lockdowns and the countless fumbles made by our government throughout the pandemic. However, in Conservative politics that frustration must translate into substantive and serious policy alternatives.

My leadership bid is the only one with a robust stance on healthcare policy, one that can counter the big government mindset that has crept in, to revitalize our healthcare system. Failure to properly address these issues now will mean Canadians’ health remains neglected long into the future.

A Charest government would immediately call an inquiry into the Liberals’ pandemic response. It’s unacceptable that Canada was subjected to more stringent lockdowns than almost anywhere else in the world. For this to happen in a developed country, with some of the world’s leading medical practitioners, demonstrates that our system is in urgent need of innovation and structural change.

The problem with a government that seeks control is that it needed little incentive to go along with lockdowns, rather than seek more accommodating, and responsible, alternatives. Their desire to control healthcare policy, keep the provinces under their thumb and prevent innovation meant that when COVID hit, we had a broken system unable to cope. So, we got locked down.

That was bad enough. But what is even more egregious is that the government has refused to learn its lessons, and instead remains committed to controlling healthcare policy, keeping it out of provincial hands that are better suited to meet demands on the ground.

Committing funding to extensive new dental care programs, while the provinces desperately await the funding needed to clear the backlogs of vital surgeries and appointments that have accrued over the past two years illustrates this government’s paternalistic approach. They try to win political plaudits with overreaching schemes, instead of supporting their provincial partners who deliver health care services.

It’s time to untie the hands of the provinces and let them develop their healthcare services based on local needs, without the federal government interfering in their jurisdictions.  A Charest government would commit to maintaining the 3% annual increase in the Canada Health Transfer and to renegotiate a long-term agreement. Despite the Liberal’s campaign promise in 2015 to secure a “long-term agreement on funding”, seven years later the provinces remain united in their criticism of Trudeau’s government failure to deliver.

With the health of Canadians on the line, a delay is no longer an option. My whole political life I have advocated for each province to determine the right healthcare delivery model that works for them, under the core principles of universality and affordability. My Conservative government, following consultations with provinces, would table a new National Healthcare Act to reform the Canada Health Act.

Recently, my leadership campaign released a comprehensive, Conservative healthcare policy that would be implemented by a Charest government. As well as unshackling the provinces, it would empower healthcare workers and prepare us for the future by investing in Canadian supply chains, clearing backlogs, and improving access to critical medicines.

The last point is one where this government is ideologically opposed to the private sector. Arcane regulations have prevented people suffering from rare diseases from getting access to the lifesaving drugs they need. Cystic Fibrosis Canada has been lobbying the federal agency and health minister for access to critical medicines, as people with the disease cannot get access to vital medicine produced solely by American pharmaceutical companies.

The logic of preventing access to such drugs while another respiratory illness ripped through our country, is baffling. My government would review Health Canada’s regulatory processes to ensure rigorous swift procurement and supply of critical medicines. Simply put, it would get the federal government out of the medical red tape business and let doctors care for patients.

Big government is not the solution. Canada needs responsible government that will treat health care as a true national legacy and one that will finally give the provinces the freedom to innovate and deliver efficient quality health services.

Canadians deserve better. They deserve a government that tackles the healthcare crisis with true leadership with the provinces and policy solutions that commit our country to caring for those who need a compassionate healthcare system.