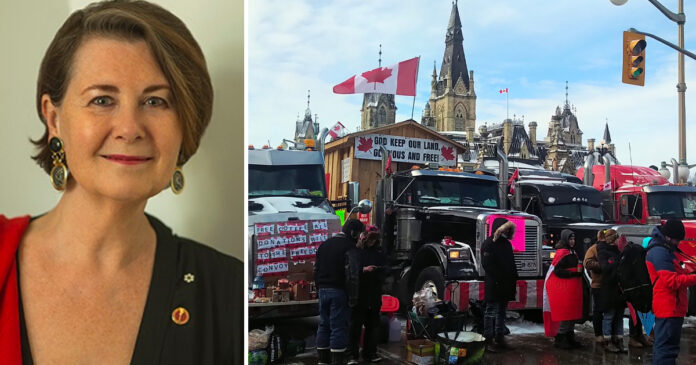 A senator appointed by Prime Minister Justin Trudeau has said there was a movement underway – including Liberals – to bring an end to the Trudeau government’s implementation of the Emergencies Act in February, and that the government was aware of that movement on the day it pulled the plug.

Manitoba senator Marilou McPhedran made the comments last week during the closing minutes of a government panel discussion on the 40th anniversary of the Charter of Rights and Freedoms.

“Just to point out that the day on which the declaration was ended by the government, there was already a movement among a significant number of senators and MPs, including some Liberals, to come up with the requisite signatures to begin the process of ending the declaration, and we didn’t end up having to do that,” she said.

“The government was well aware that we were fairly far along in creating that joint letter that was required under this particular section, and instead there was the decision just to suspend.”

Immediately after those remarks, McPhedran concluded the discussion, saying that after 40 years with the Charter, “many of the interpretations that seemed to make sense no longer make sense for Canadian society, as it is now.”

“And so, leaving here today, well, I’m hoping that where we have consensus is the need not only for awareness raising, but actually for much deeper, stronger civics education, charter-based education, not only in our schools, not only in our higher education institutions, but throughout our society. Because if we don’t know our rights, we cannot live our rights.”

True North reached out to McPhedran for clarification about the movement but received no response by time of publication. Trudeau appointed McPhedran to the Senate in 2016 as an independent, after expelling Liberal senators from his caucus in 2014. The move left Trudeau free to appoint senators, but also to call them independent of the Liberal Party.

The Trudeau government invoked the never-before-used Emergencies Act on Feb. 14, saying the legislation’s powers were required to deal with ongoing protests against pandemic restrictions, including the Freedom Convoy in Ottawa.

“There’s a high level of frustration that this situation has gone on as long as it has,” said Trudeau. “Those people have gone from protesting and disagreeing with those (COVID-19) measures, to limiting and blocking the freedoms of their fellow citizens.”

Trudeau refused to revoke the act even after a joint force of municipal, provincial and federal police cracked down on freedom protesters between Feb. 17 and 20. Instead, the Liberal government used NDP support to extend its emergency powers in a parliamentary vote on Feb. 21 – an extension that could have kept them going until mid-March, before they were required to be reviewed.

When the vote was to be confirmed in the upper house, however, senators expressed open frustration with being expected to rubber stamp the Trudeau government’s decision without access to the information that had led to it.

“This is a serious step that we’re contemplating here today,” said Conservative senator Elizabeth Marshall. “What exactly happened that the government decided to invoke the act?…Because it seemed like for three or four weeks, there was nothing, they were just tolerating it.”

Mounting opposition to the government’s decisions both to implement and prolong the Emergencies Act concluded with Trudeau revoking it on Feb. 23.

“The situation is no longer an emergency. Therefore, the federal government will be ending the use of the Emergencies Act,” said Trudeau.

“We are confident that existing laws and by-laws will be sufficient to keep people safe.”

A review committee on the use of the act has been launched, as required by law. Last week, 15 civil rights groups called for the inquiry to be independent and transparent.

“It should not be marred by partisan fights,” petitioners wrote. “We are concerned about the use of state and police powers to suppress constitutional rights.”

True North also reached out to Conservative and Opposition Senate leader Don Plett and will update this story as new information becomes available.