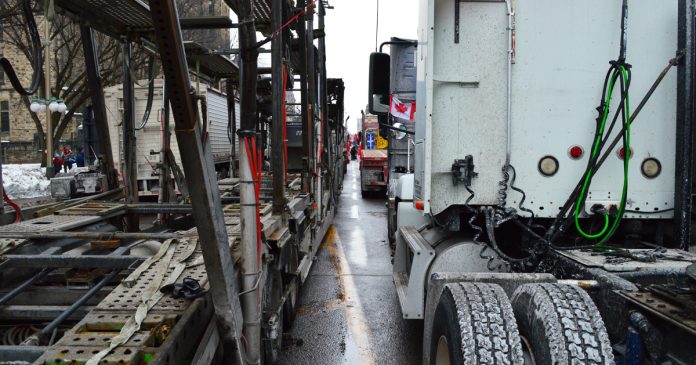 One of the organizers behind the Rolling Thunder motorcycle convoy has warned that the Ottawa Police’s plan to ban “vehicle-based or supported protests” from the city’s downtown will result in a “free-for-all”.

On Monday, the Ottawa Police Service (OPS) announced it would be creating “vehicle exclusion zones” that would cover large segments of downtown Ottawa.

OPS chief Steve Bell told 580 CFRA that they had “identified that based on what’s occurred in our city over the last number of months, that vehicle-based protests shouldn’t occur in that area.”

According to Bell, contributing factors in the decision to limit protest downtown include the Freedom Convoy and expectations to maintain the safety and well-being of Ottawa communities who are “scarred by what happened in February.”

However, as reported by The Canadian Press, organizer Neil Sheard (also known as “brother Neil”), is calling on the city to reconsider its decision, saying that the lack of a designated route for bikers to follow could create safety issues.

“Thousands of people are coming to the city, there could be over a thousand bikes coming,” said Sheard in a YouTube video. He added that they “had a route nailed.”

Sheard said the city had taken away the “quasi control that we could’ve had to guide the motorcycles.”

He addressed Ottawa mayor Jim Watson directly in his video, saying “Mr. Mayor, I am imploring you to have a relook at this.”

The Rolling Thunder bike convoy is set to arrive in Ottawa on Friday. Unlike the Freedom Convoy, participants are only planning on staying in Ottawa for the weekend.

The bikers and their supporters will hold two rallies on Parliament Hill – one on Friday evening and another Saturday afternoon. They will also hold a memorial service at the National War Memorial at 10:00am Saturday. The service will be hosted by advocacy group Veterans for Freedom.

On Sunday, participants are invited to a church service at the Capital City Bikers Church before they head back to where they came from.

In his video, Sheard reminded participants to be peaceful, dignified and respectful.

“Don’t have them paint us with a bad brush,” he said.

The Freedom Convoy had received large amounts of negative coverage from the legacy media, as well as disparaging remarks from some elected officials.

Before the truckers had even arrived in Ottawa at the end of January, Prime Minister Justin Trudeau had described them as a “small fringe minority” holding “unacceptable views.” He also called them “tinfoil hats” and referred to a handful of bad actors as representing the whole movement.

Meanwhile, Ottawa councilor Diane Deans went as far as calling the peaceful convoy demonstrators “terrorists.” The protests were brought to an end on Feb. 17-20 by a joint force of national, provincial and municipal police after Trudeau invoked the Emergencies Act on Feb. 14.