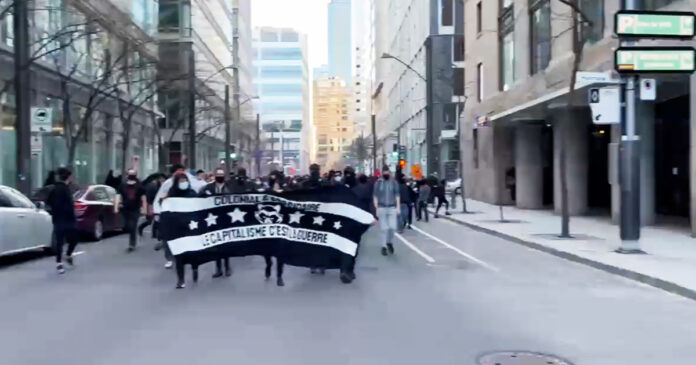 A “May Day” anti-capitalism protest in Montreal turned violent Sunday, with one man arrested for assault with a weapon against a police officer.

Another police spokesperson, Manuel Couture said that the protest began at Place du Canada and that “within minutes,” protesters began using smoke bombs and committing acts of mischief.

Police reportedly ordered officers to use chemical irritants to force the crowd to disperse.

As a result of the demonstrations, windows of commercial buildings were shattered, graffiti spray-painted and vehicles damaged. A Twitter video shows protesters throwing rocks at the windows of the Desjardins building.

The protest was reportedly organized by a group called “The Convergence of Anti-Capitalist Struggles” (CLAC in French).

The organization “aims to disseminate information relating to the abolition of the police and prisons.”

Little coverage of the protest appeared on legacy media.

In contrast with the scenes in Montreal, the Rolling Thunder motorcycle convoy took place in Ottawa this weekend to protest continuing COVID-19 restrictions in Canada.

True North’s Elie Cantin-Nantel was on the ground.

Despite the peaceful demonstration, Ottawa police were armed with batons and other riot gear. A joint force included officers from the Ontario Provincial Police and RCMP before protesters arrived on Friday. Ten arrests had been made as of Sunday afternoon in Ottawa.

Ottawa mayor Jim Watson said that residents are “fed up with these kinds of events coming into our city.”

Another event in Toronto on Saturday saw a ‘Free Palestine’ protest marched through the downtown core.

Chants included, “Down with Zionism!” and “Israel is a terror state!”

A video posted to YouTube shows demonstrators marching through Toronto.

It comes on the heels of another anti-Israel event last week. The rally saw multiple chants and actions that contained hateful anti-Semitic, anti-Zionist and anti-Israel sentiments.

This included the cheering of recent rocket attacks against Israel by Lebanon, which attendees praised with shouts of “Allahu Akbar!”

No arrests were made at either event.