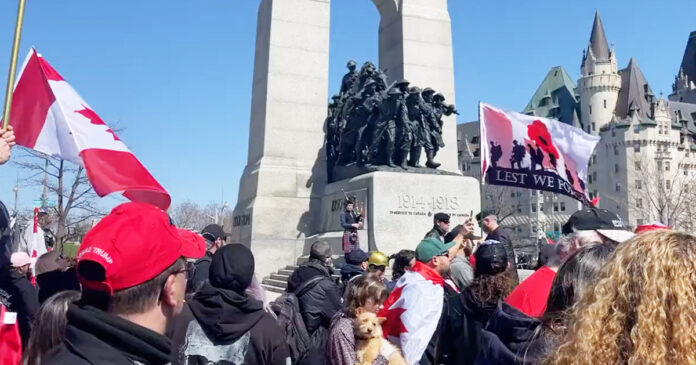 The Rolling Thunder motorcycle convoy in Ottawa has concluded, with Saturday and Sunday going relatively smoothly, despite some dramatic incidents.

Motorcycles were able to make their way to the city’s downtown, despite the rally’s initial plans having been jeopardized after the Ottawa Police Service (OPS) said it would create “vehicle exclusion zones” to restrict “vehicle-based or supported protests.”

Saturday started with the bikers taking part in the motorcycle rally meeting in the parking lot of the St Laurent Shopping Centre, located in Ottawa’s East End.

At 10:00 AM, a large group of people assembled at the National War Memorial for a memorial service hosted by the volunteer organization Veterans for Freedom. Rolling Thunder organizer and veteran Neil Sheard (also known as “Brother Neil”) addressed the crowd.

There were also other speeches and testimony from veterans, as well as prayers and bagpipes.

The memorial service was followed by the scheduled Rolling Thunder motorcycle rally itself, which was facilitated by police. OPS allowed groups of 75 bikes to follow a designated route (which was changed for safety reasons) towards the city’s downtown. There was a total of four rounds of bikes.

Supporters cheered the bikers from the roadside as they passed by  on Laurier and Elgin Streets, making a loop. OPS say an estimated 350 motorcycles took part.

On Saturday afternoon, demonstrators gathered for the second planned Freedom Fighters Canada rally on Parliament Hill. Some of them were making hot dogs on a grill, a sight familiar to those who attended the Freedom Convoy.

A number of people gave speeches, including Adopt-a-Trucker founder Chris Garrah, who said that his bank account had been frozen for 39 days following the Freedom Convoy. There were also some musicians who performed freedom-themed songs.

A few counter-protesters were present at the Parliament Hill rally, with some showing their opposition to controversial speaker Christopher Saccoccia (commonly known as Chris Sky). Saccoccia previously denied that six million Jews died in the Holocaust, and court documents allege he threatened to kill elected officials.

Other counter-protesters were present in downtown Ottawa throughout Saturday, including some in front of the National Arts Centre and the Prime Minister’s office. There was also an individual holding a sign that referred to the demonstrators as “Vanilla ISIS.”

After the speeches on Parliament Hill wrapped up, participants marched through the capital, going down Bank Street, Gladstone Avenue and up Elgin Street in Ottawa’s Centretown neighbourhood. At one point during this march, protesters were reportedly egged from above.

Police entered the apartment from which the eggs were reportedly being thrown. Police also arrested a driver who drove past a checkpoint, breaking his car windows to remove him from the vehicle.

According to police, the man breached conditions imposed on him during the Freedom Convoy, and now faces several charges.

Police arrested a total of 10 people this weekend during the demonstrations, seven of whom were on Friday and three on Saturday. Bylaw officers also handed out multiple tickets and towed vehicles, including some that took part in the convoy blocking Rideau Street Friday.

Overall, police presence in downtown Ottawa was extremely heavy throughout the weekend, with OPS getting support from the OPP, RCMP and municipal forces including the Toronto Police Service and the York Regional Police.

As the sun set on Sunday, the crowds – as well as police presence – began to dwindle, making the night quieter than the lively ones of the Freedom Convoy.

Rolling Thunder Ottawa programming ended with a special church service at the Ottawa City Bikers Church – which was vandalised prior to the service taking place. Police are investigating the incident as hate-motivated mischief.

Despite the vandalism, the service saw full capacity attendance with an overflow room downstairs.

Rolling Thunder is the biggest freedom event to take place in Ottawa since the Freedom Convoy. Unlike the original convoy, which stayed in Ottawa for three weeks, Rolling Thunder Ottawa wrapped up on Sunday.

A message on Rolling Thunder Ottawa’s website reads “(s)ee you next time!”

The original Freedom Convoy was forcibly removed on Feb. 17-20 after Prime Minister Justin Trudeau invoked the Emergencies Act on Feb. 14 – it was the first time in Canadian history that the act had been used.