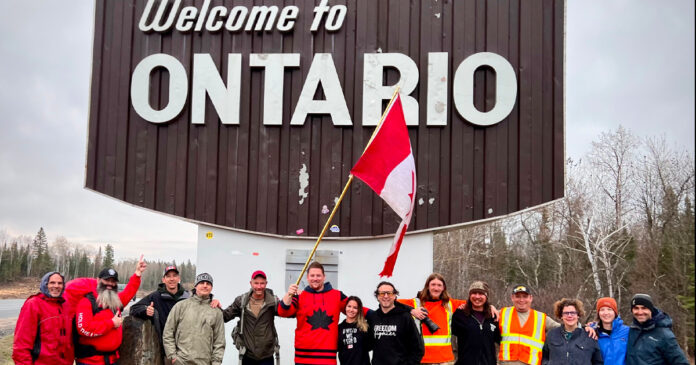 Canadian Armed Forces (CAF) veteran James Topp embarked on the last and longest leg of his protest march to Ottawa this week, crossing into Ontario from Manitoba on Day 79 of his trek and putting more than 2300km behind him.

“This is the final province but it’s huge, so we’ll be here for a while,” Topp posted from the Ontario border on Monday. “Thunder Bay is roughly 550km away, so you’re on notice! Roughly 1.5 months to get to Ottawa from here for your mental calendars.”

Ontario marks the final province of Topp’s journey, which began in Vancouver on Feb. 20. Topp is marching in opposition to government overreach during the COVID-19 pandemic – in particular vaccine mandates that forced people out of work or pressured them “into taking part in medical procedures that they would not otherwise have accepted.”

The army veteran and his crew arrived in Manitoba on Apr. 26 and crossed the last of the prairie provinces in just under two weeks.

There were several highlights to the trek across Manitoba, including Topp calling out the CBC for ignoring his march. Last week, Topp denounced the state outlet – which received $1.4 billion last year from taxpayers and is mandated to reflect Canadian cultural expression – from the sidewalk in front of their Winnipeg headquarters.

“We just walked 2343 kilometers,” Topp said. “Check it out. And here we are in front of CBC Winnipeg/CBC Radio Canada here and, curiously enough, nobody from this organization has come to talk to us. Isn’t that interesting?”

“We’re only going to be marching from Vancouver to Ottawa, and we are at the halfway point here in Winnipeg. And so far, nobody in the Canadian Broadcasting Corporation has seen fit to come and talk to us about what we’re doing.”

To date, the CBC’s only reporting on Topp seems to have been in mid-February, when the state outlet contacted the Department of National Defence (DND) to ask for comment on active military members supporting convoy protests.

Topp, who is in the process of being removed from the CAF over his refusal to accept COVID shots, is also now being represented by the Justice Centre for Constitutional Freedoms (JCCF), which has retained lawyer and military veteran Phillip Millar.

Having moved into the reserves after his full-time career, Topp is facing what is known as a 5F release – or “Unsuitable for Further Service” – which “(a)pplies to the release of an officer or non-commissioned member who, either wholly or chiefly because of factors within his control, develops personal weakness or behavior or has domestic or other personal problems that seriously impair his usefulness to or impose an excessive administrative burden on the Canadian Forces.”

Millar argues that the 5F release was never meant to be applied in this way and that the mandatory COVID-19 vaccination policy for military personnel is unjust and political.

“The mandatory vaccine is a flawed policy based on a stubborn refusal to acknowledge that the underlying justification for the mandate has changed,” said Millar in a press release. “The government is using the Canadian Armed Forces as a policy arm to promote its vaccine mandates. The policy hurts the operational effectiveness, morale, and integrity of the system.”

“We cannot let them get away with ruining the lives and careers of dedicated Canadians who serve their country,” he said. “Our soldiers, sailors and air force personnel deserve more. They are highly trained, and many have served their country for years.”

Topp expects to arrive in Ottawa some time in early-to-mid June.