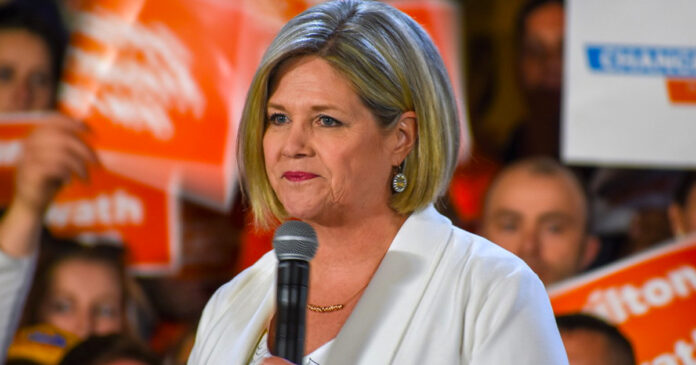 In the platform’s “health equity” section, NDP leader Andrea Horwath committed to providing “full coverage of transition drugs and medications” and to make it easier for people including kids to access sex change surgeries.

Currently, Ontario has several clinics which provide medical transition support services to youth. The province also doesn’t have an age of consent for gender reassignment treatment or counselling.

“There is no general age of consent to treatment or counselling; instead, the issue depends on whether the young person is capable of consenting,” writes the Canadian Mental Health Association.

Father and activist Chris Elston spoke to True North about the Ontario NDP’s proposed policy. Elston is better known as “Billboard Chris” for travelling across North America in an attempt to expose gender ideology and its effects on children.

“The NDP has been completely captured by the most radical wing of their party who think that it is somehow loving and kind to try to change the sex of a child with unregulated, unproven, experimental puberty blocking drugs and opposite-sex hormones that leave children infertile, anorgasmic, and dependent on pharmaceutical drugs for the rest of their life,” said Elston.

“Historically, 80 – 90% of children with gender dysphoria simply grew out of it, and the majority grew up to be gay. So in addition to other problems with the ‘gender affirming care’ or ‘affirmation only’ model, this is very damaging to kids who would just grow up to be gay.”

Elston pointed to a lack of proper clinical trials for puberty blockers like gonadotropin releasing hormone agonists and a ballooning mental health crisis among youth.

“This is a mental health crisis that is being ignored, and the practice at gender clinics now is to simply affirm the child’s self-diagnosis as trans, and start them on a medical pathway that causes permanent physical damage. The NDP is also ignoring the huge numbers of children on the autism spectrum, or in state care who are presenting as trans,” Elston told True North.

Additionally, the opposition party squaring off against the ruling Progressive Conservatives in the upcoming election seeks to pass Bill-17, also known as the Gender Affirming Health Care Advisory Committee Act.

The law seeks to speed up the process by which a person including a minor could access a medically induced gender transition. Transgender “youth” are specifically mentioned as a group represented by the policy.

If passed it would lead to the creation of a Gender Affirming Health Care Advisory Committee which would advise Ontario’s Minister of Health on changes to the provincial healthcare system.

Critics have also said that it would reduce the number of referrals required from doctors before transgender individuals can be operated on.

“If this policy is enacted, more children will simply be fast-tracked into irreversible harm from puberty blockers, cross-sex hormones, and surgeries, with no clinical basis to support that this is positive for their mental health,” said Elston.

“Thousands of children will end up sterilized, with health problems for life, in what is arguably the greatest child abuse medical scandal in modern medicine history.”

In the bill, gender affirming care is defined as “procedures, medical treatments and referral processes that align a patient’s body and physical presentation with their gender identity.”

NDP MPP and sponsor of the bill Suze Morrison has also tweeted that the law encompasses increasing access to trans children.

Ontarians will head to the polls for the 2022 Ontario general on June 2.