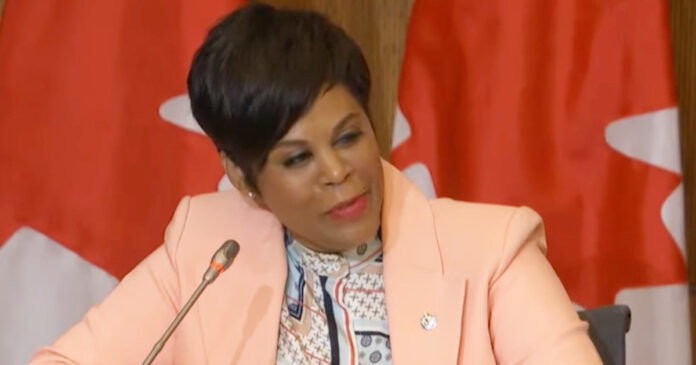 The federal Liberal minister for women and gender equality and youth would not say whether unvaccinated US women could enter Canada to terminate their pregnancies, despite the government saying earlier that women denied abortions by a reversal of Roe v. Wade would be welcome.

Responding to questions by True North’s Elie Cantin-Nantel at a press conference on Wednesday, minister Marci Ien finally stated, “I don’t deal in hypotheticals” when pressed whether the government would allow all US women – including unvaccinated women from marginalized communities – into the country for abortions.

A leaked draft of US Supreme Court Justice Samuel Alito’s decision opinion would overturn the precedent set by the 1973 case Roe v. Wade, which established a right for women to abort their pregnancies in the US constitution.

In response to the leak, Liberal minister of families, children, and social development Karina Gould said in an interview with the CBC that American women seeking an abortion in Canada are welcome to come.

Public safety minister Marco Mendicino reaffirmed this sentiment by alerting the Canada Border Services Agency (CBSA) that American women seeking to terminate their pregnancy were welcome to cross the border.

“I’ve engaged CBSA (the Canada Border Services Agency), my office is currently working with them to make sure there are clear guidelines so that women who may not be able to access healthcare including abortions are able to come to Canada,” he said.

Unvaccinated Americans and Canadians have been barred from crossing the Canada-US border since Mar. 2020, despite vaccinated residents of both nations regaining this right in Nov 2021.

Furthermore, while black Americans make up about 13% of the general population, statistics show they sought out 38% of all abortions. In addition, only 47% of black Americans are fully vaccinated.

This data suggests that black Americans and other historically marginalized groups who rely more on abortion services would be turned away at the Canadian border at a disproportionately high rate.

True North reached out to Gould’s office and CBSA for comment earlier this week but has received no response.