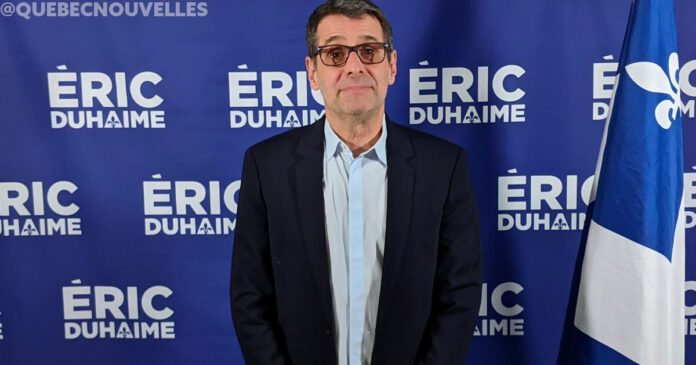 Conservative Party of Quebec leader Eric Duhaime said he still wants a debate in English after two other major Quebec party leaders – including Premier Francois Legault – have refused to participate.

The planned debate by the English-language media consortium was cancelled following a snub by Quebec premier and CAQ leader Legault as well as Parti Quebecois (PQ) leader Paul St-Pierre Plamondon.

The hosting consortium, which is made up of four anglophone legacy media outlets (CBC, CTV, Global and CJAD), had invited the leaders of Quebec’s five major parties to a debate that was set to take place on Sept. 20.

It would have been the second such debate in Quebec history. The first took place during the 2018 election campaign, and was attended by Legault and then PQ leader Jean-Francois Lisée.

Legault declined to participate in this year’s English debate, however, with spokesperson Ewan Sauves telling CBC News that “(o)ne must understand that each debate requires significant and non-negligible preparation time.”

On Twitter, St-Pierre Plamondon said that his party would not participate in the English debate because “(t)he official and common language in Quebec is French.”

He added that he would be available to take questions from anglophone journalists.

Duhaime blasted Legault for snubbing the English debate, accusing him of being divisive and “not a statesman.”

The Conservative leader told The Canadian Press he believes that Quebecers deserve to see issues important to their community debated, including language – something that has been in the news lately with the province’s controversial Bill 96.

Duhaime also wrote a letter to Quebec Liberal leader Dominique Anglade, asking her to join him in a televised English debate even if Legault and St-Pierre Plamondon wouldn’t be there.

“I suggest that we debate anyway, you and I,” wrote Duhaime. “I understand that at least one English-language media outlet has expressed interest in organizing such an event. However, it must ensure from the outset that you and I agree to participate.”

He added that “(t)he co-spokesperson for Québec Solidaire (Gabriel Nadeau-Dubois) could also join.”

“Democracy has been put on pause in Quebec for over two years,” Duhaime wrote. “We cannot begin to eliminate opportunities to present our ideas and platforms in preparation for the October 3rd election.”

In an email to True North, Duhaime refuted Legault’s excuse that he does not have the time to do an English debate.

“It doesn’t hold up,” Duhaime wrote. “He has time to do two debates in French. It doesn’t take any longer to prepare in English.”

Duhaime added that “Mr. Legault doesn’t want to debate in English in 2022, when he wanted to in 2018 because he has had a LOT of media exposure in the last two years, including his almost daily press conferences, and the opposition has had very little.”

“He’s making an ultra-partisan calculation, on the backs of anglophones.”

It should be noted that Legault addressed Quebecers in English at multiple press conferences throughout the pandemic, including one where he announced a return to restaurant lockdowns, indoor gathering bans and a second strict, police-enforced curfew amid the Omicron wave.

Duhaime, who calls himself a Quebec nationalist, told True North that “(t)alking to English speakers in their mother tongue takes absolutely nothing away from French-speaking Quebecers.”

“The French language is our common language. No doubt about it. That being said, we can also talk to Anglos,” added Duhaime.

“Before being partisan, we all need to be democrats.”

In response to Duhaime’s invitation, Quebec Leader Dominique Anglade said that “if a consortium of English-language media is interested in holding a debate in English,” she would be “very open to participating.”

The Quebec general election is set to take place on Oct 3. Polls show Legault’s CAQ is expected to win an even bigger majority – this despite the government imposing some of the harshest Covid restrictions in the Western world.

Some polls show Duhaime’s Conservative Party of Quebec in second place, suggesting the party is set to make massive gains.

It should be noted that the Conservatives placed sixth in the last provincial election, earning only 1.46%.