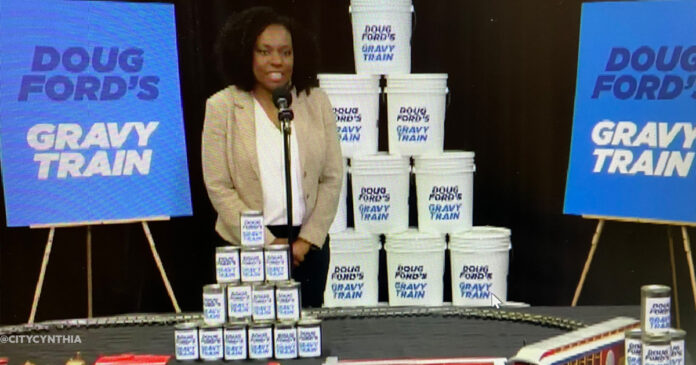 The Ontario Liberal Party (OLP) faced ridicule over the weekend after a campaign stunt promising to reveal a “new scandal” involving Ford and past PC candidates fell flat.

On Saturday, the OLP put out a press release teasing the revelation of a “new scandal involving sixteen Ford-Conservative candidates.” The unveiling was to be done by Scarborough-Guildwood MPP and failed OLP leadership candidate Mitzie Hunter as well as a “special guest.”

Hunter made the promised reveal Sunday morning where she accused Ontario PC leader Doug Ford of being the “conductor” of a gravy train.

The Liberals claimed that 16 failed Ontario PC candidates –  approximately 33% of the 48 unsuccessful PC candidates in the 2018 general election –  received patronage appointments from the Ford government.

These included former Orleans PC Candidate Cameron Montgomery, who was appointed as full-time Chair of the EQAO board, and former Niagara Falls candidate Chuck McShane, who was made commissioner of the Niagara Falls Bridge Commission.

“Doug Ford always finds a way to look after his friends, whether they be donors, for-profit long-term care owners, or defeated Conservative candidates. Doug Ford claiming he was for the people was probably the biggest lie told in the last campaign,” said the OLP.

As for what is scandalous, Hunter said that the scandal is the fact that Doug Ford lied.

The OLP and Hunter Liberal Party were ridiculed by voters on Twitter following the announcement, with some calling it dumb and stating that they felt bad for Hunter.

Another said that Hunter should apologize to journalists who woke up on a Sunday morning expecting a scandal – only to hear her “fake scandal” announcement.

The Liberals’ announcement was also called out by members of the legacy media, including Toronto Sun columnist Brian Lilley, who called it a “wet firecracker.”

“Anyone who bothered to tune in for the hyped news conference quickly turned back to pondering the beautiful spring weather outside,” wrote Lilley.

“The more embarrassing point was that the Liberals included people appointed to sit on boards where they are granted a per diem of $150 to attend board meetings three to four times per year,” he added.

“It shows the Liberals getting desperate.”

The Ontario PC Party responded to Hunter’s announcement by calling it a “train wreck,” and proceeded to troll the OLP on Twitter.

The OLP was also caught having made a mistake on a graphic posted to Instagram containing the names of the people who received patronage appointments. They listed Ben Levitt – who ran in Hamilton West-Ancaster-Dundas – as the candidate of record for Niagara Centre.

When the Ontario Liberals were last in power, they saw multiple scandals including the cancellation of gas plants.

The OLP’s almost 15-year rule came to an end in 2018, where the party was reduced to just seven seats in the Ontario Legislature – enough to lose them official party status. It was the worst defeat of any ruling  party in Ontario history.

The Ontario general election will take place on Jun. 2