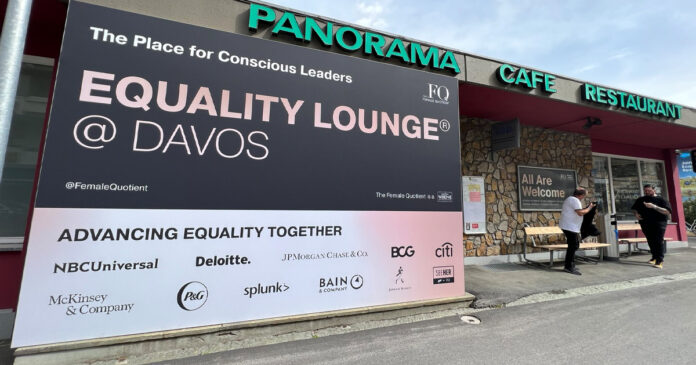 It’s been eye-opening to see just how inauthentic much of it is.

Rebel News reporter Avi Yemini, who arrived in Davos Tuesday, got a glimpse of this himself when he saw construction crews erecting façades on buildings on the Promenade, the town’s main drag.

These glitzy façades adorn temporary outposts used by companies – and even countries – to promote themselves to the thousands of elites descending on Davos for the weeklong summit.

(I’ve no idea what these buildings are used for the remaining 51 weeks of the year).

The real estate, the temporary face-lifts, and the hospitality tabs, not to mention the costs to attend the WEF meeting itself, total in the millions. In these spaces, companies woo investors and politicians. Countries try to attract to find capital.

Among the countries who’ve sponsored “Houses,” as they’re called in Davos, are Greece, Namibia, and Poland. One of this year’s anticipated hotspots is Ukraine House, situated in a building that normally functions as the Davos casino.

Ukraine House is operated out of Casino Davos. A few moments ago I spotted Ukrainian billionaire Victor Pinchuk strolling by. pic.twitter.com/Mp59hXF0KZ

“Ukraine House Davos is returning to Davos thanks to the generosity of the Davos community, which graciously provided a venue and services at no charge,” the Ukraine House website says.

When I was in the India lounge, a WEF meeting attendee nonchalantly mentioned he was with a company eyeing setting up an operation in India. Within moments, the greeter summoned an Indian trade official who started chatting the man up.

At the last WEF meeting, Russia sponsored Russia House. This year, an NGO has put on the Russian War Crimes House. pic.twitter.com/Ym3AoiILfE

At the last WEF annual meeting, Russia sponsored a house. This year, a non-governmental organization backed by a Ukrainian oligarch has set up the “Russian War Crimes House,” an exhibit featuring jarring and graphic images from the war in Ukraine. The Russian War Crimes House was guarded by armed police and security.

A brief view at some of the exhibits in the Davos Russian War Crimes House. pic.twitter.com/kEalq7UBjg

Companies including Salesforce, Meta (formerly Facebook), and Accenture have large footprints here with their hospitality centres, many of which are closed off to those not on their guest lists.

Many of these spaces are only being used once or twice in the entire week. The sign outside the Female Quotient’s “Equality Lounge” said “All Are Welcome,” though regretfully I was told to come back Tuesday as it hadn’t opened yet.

Generally though, most of these spots are open. The hosts assume most people here are important, and many of them seem to be run by marketing firms which want to tell their clients they filled the rooms with those important people. While I was in one of them, two vegan protesters barged in and took a bunch of fruit. No one seemed to mind.

The “Saudi Café,” part of a sprawling network of buildings sponsored by the Saudi Arabian regime, was all too happy to offer traditional Saudi delicacies to anyone. What the regime lacks in human rights it makes up for in hospitality, evidently. Saudi friendliness is the least-convincing façade I’ve encountered so far.

Just down the road, a house sponsored by the Saudi crown prince’s foundation was giving out ice cream.

Most of the engagement I’ve seen in these houses is just glad-handing and networking – no multibillion-dollar deals or anything. But it shows there is cachet in being here and, more importantly, being seen.

Orange badges are reserved for the press, but some legacy media journalists are also here with blue-lined white badges, particularly those friendly with WEF. Green badges go to those in the entourages of the white-badged elites, such as political staffers and corporate flacks.

Normally at conferences, people can’t wait to take their nametags off. Here, people wear them around proudly.

As you’ll know if you caught my previous reports on this conference, I am completely badgeless, though I’m told cabinet ministers and Saudi princes freely walk around without their badges. Perhaps before the week is up, I’ll manage to convince a security guard I’m an uber-important Ukrainian oligarch and be able to hit up the good parties.

Beyond the fake buildings and fake status markers, I’d be remiss to not also point out the fake climate crusaders.

Many of the panels scheduled for the conference this week are about climate change, going net-zero, transitioning away from oil and gas, and related topics. Yet I couldn’t help but notice the helicopters flying overhead dropping off the VIPs and dignitaries coming to Davos to solve climate change.

Once they land, they get picked up in one of the hundreds of waiting BMW or Mercedes Benz limousines, which drives them the kilometre or two into town to whichever of the “secure” (publicly-inaccessible) hotels they’re staying at.

I don’t have much in common with Antifa “climate justice” protesters generally, but I spoke to a few earlier who aren’t convinced by the Davos crowd.

I was quite moved by a woman I spoke to from KlimaSeniorinnen, a Swiss activist group made up of older women. She doesn’t own a car. She walked to Davos, in fact. We don’t see eye to eye politically, but she practices what she preaches unlike those who jet in from around the world to talk about the climate.

She was real, even if nothing else was.