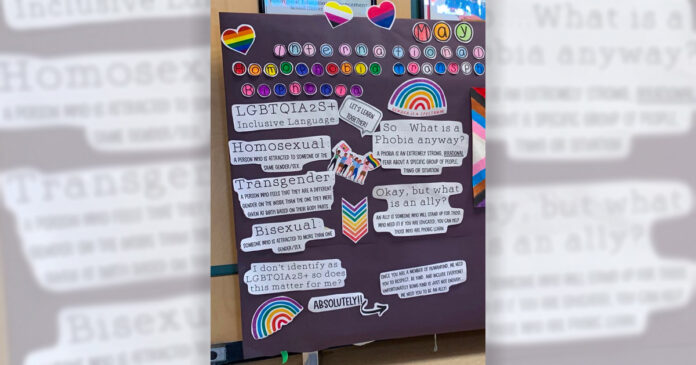 Parents are expressing concern after a British Columbia elementary school put up a board teaching six and seven-year-old kids that “gender is a spectrum,” as well as gender ideology terms.

In a now-deleted tweet, the Sooke School District (SD62) school board wrote that a “Grade 1 teacher champion at Ruth King Elementary along with (a) fellow teacher” created the display “for the school lobby for the International Day Against Homophobia, Transphobia and Biphobia.”

The display features various definitions on the terms “homosexual, transgender and bisexual.” One of the features is a rainbow with the message, “gender is a spectrum.”

“Since you are a member of humankind, we need you to respect, be kind, and include everyone! Unfortunately being kids is just not enough… We need you to be an ally!” the board states. “An ally is someone who will stand up for those who need it! If you are educated, you can help those who are phobic learn.”

The school has deleted the tweet and associated message after receiving public backlash. SD62 has since published a statement calling for respectful dialogue online.

“Our online spaces will always be safe for all members of our communities, but especially our students. We all share a digital responsibility to engage and interact respectfully online,” said SD62.

Elston went on to say that the consequences of gender ideology include kids turning to puberty blocking drugs and other medically induced gender-change operations.

“We are teaching children that if they don’t conform to sexist, regressive stereotypes that they must be trans,” he said. “This has resulted in thousands of kids being referred to gender clinics where they are given puberty blocking drugs and cross-sex hormones which together lead to sterility, anorgasmia, and a lifetime dependence on pharmaceuticals.”

In 2019, the issue of gender ideology in schools reached the Ontario Human Rights Tribunal after a family brought a discrimination claim against a teacher with the Ottawa-Carleton District School Board for telling a 6-year-old student that “girls are not real, and boys are not real.”

The case is ongoing.