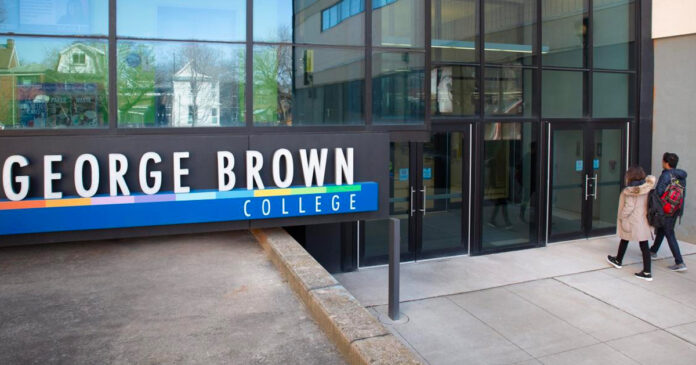 Toronto’s George Brown College is requiring students to declare that they benefited from the “colonization and genocide of Indigenous people” before being allowed into online classes.

While an IT waiver is a standard document for entering online school, the college’s form makes no mention of online learning.

“We acknowledge this sacred land on which George Brown College operates,” it reads. “As settlers or the displanted, we benefit from the colonization and genocide of the Indigenous peoples on this land. In order to engage in resistance and solidarity against the past and present injustices inflicted on the Indigenous people of this land, it is imperative we constantly engage in acts of awareness and decolonization.”

The form then gives students only two options – to click “agree” or to cancel and ultimately be unable to access their class.

“By selecting ‘I agree,’ you are indicating your acknowledgement of this statement,” the  form reads. “Our intent is not to impose agreeance, but to inform through acknowledgement. This acknowledgement is to generate awareness and offer opportunities for personal reflection.”

Recently, George Brown College adopted an “anti-racism action plan” that called for the prioritization of decolonization and equity values.

“In our 2026 strategic plan, the recommendation is to see anti-racism, equity and decolonization values and principles elevated and prioritized, providing greater opportunity for bolder action than could be included in this current plan,” reads the plan.

The school defines “decolonization” as “the process of deconstructing colonial ideologies of the superiority and privilege of Western thought and approaches.”

“Decolonization involves valuing and revitalizing Indigenous knowledge and approaches and rethinking Western biases or assumptions that have negatively affected Indigenous ways of being,” it states.

“To truly heal these wounds, we must first acknowledge the truth, not only about residential schools, but about so many injustices both past and present that Indigenous Peoples face,” said Trudeau.

As first reported on by True North, reports on unmarked graves supposedly discovered at residential schools last year were full of misinformation and erroneous claims. To date, no remains of First Nations children have been unearthed.