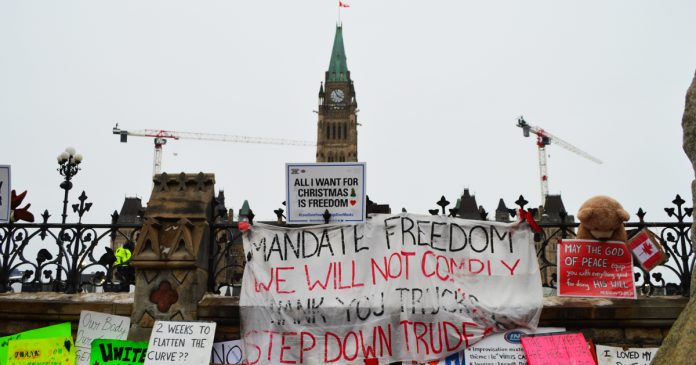 Former Ottawa Police Services (OPS) chief Peter Sloly has told parliamentarians that neither he nor anybody else at the department requested Prime Minister Justin Trudeau invoke the Emergencies Act to deal with the Freedom Convoy protesters this February.

The former police chief made the comments during a Commons house affairs committee meeting on Thursday.

“Did yourself or anyone else request the invocation of the Emergencies Act?” asked Conservative MP Kelly McCauley.

“I did not make that request, and I’m not aware of anybody else in the Ottawa Police Service who did,” replied Sloly.

Sloly headed operations in Ottawa at the height of the convoy demonstrations but stepped down on Feb. 15, reportedly over conflicts with senior personnel. He was replaced by interim police chief Steve Bell, who took the helm of the OPS during the crackdown on protests.

Bell too has recently shut down claims by the Trudeau government that the feds acted on the request of law enforcement when granting themselves unprecedented emergency powers on Feb. 14.

During separate testimony to the committee this May, Bell stated that his department made “no direct request” for such powers.

“Did the Ottawa police make a request to the federal government to invoke the Emergencies Measures Act? Yes or no?” asked Conservative MP Andrew Scheer.

“So, we were involved in conversations with our partners and the political ministries,” Bell said. “We didn’t make a direct request for the Emergencies Act.”

Commissioner of the RCMP Brenda Lucki had the same thing to say about the Trudeau government’s claims that police recommended invocation of the act – namely, that no such thing ever happened.

“No, there was never a question of requesting the Emergencies Act,” said Lucki.

Both Prime Minister Justin Trudeau and Public Safety Minister Marco Mendicino have repeatedly maintained that adopting the emergency powers was a decision reached after advice from law enforcement.

“When illegal blockades hurt workers and endangered public safety, police were clear that they needed tools not held by any federal, provincial or territorial law,” Trudeau said on Apr. 27.

“It was only after we got advice from law enforcement that we invoked the Emergencies Act.”