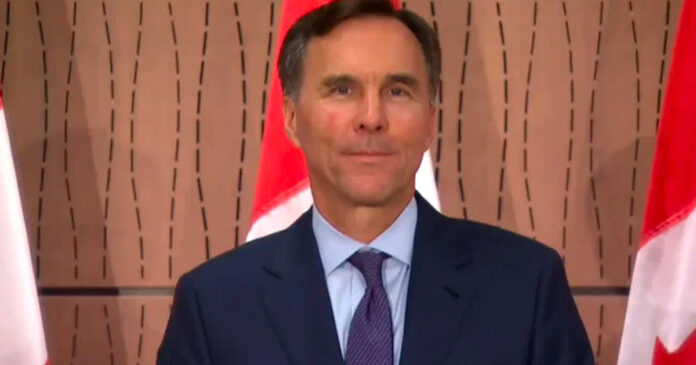 Morneau – who was ousted on the heels of the WE Charity scandal in 2020 – admitted in a speech to the C.D. Howe Institute on Wednesday that he is more worried about Canada’s economy today than he was when he first became finance minister in 2015.

“When I look at politics in Canada today – from the perspective of a former insider – I have to confess that I’m much more worried about our economic prospects today, in 2022, than I was seven years ago,” said Morneau.

“So much time and energy was spent on finding ways to redistribute Canada’s wealth that there was little attention given to the importance of increasing our collective prosperity.”

OECD statistics project that Canada will only have a 0.7% GDP per capita growth from 2020 to 2030, making the country dead last in comparison to other advanced economies.

“There is no real sense of urgency in Ottawa about our lack of competitiveness,” said Morneau. “It’s not that this is one of the big problems facing Canada’s economy, it’s that this is our fundamental problem. Nothing else is solvable if we don’t put this issue first.”

After resigning from his post last year, Morneau unsuccessfully joined the race to become the OECD’s next secretary-general. Although the former finance minister was no longer in government, taxpayers were billed for expenses related to his leadership bid.

Morneau did not mention current finance minister Chrystia Freeland by name in his recent speech but did say that current “political incentives” run against long term economic solutions.

“We have to stop thinking about policy in terms of short-term wins, and refocus our efforts on long-term solutions. I know that all of the political incentives run counter to this,” said Morneau.

Morneau also took a shot at populist campaigns that undermine institutions like the Bank of Canada. Conservative MP and leadership contender Pierre Poilievre has been a vocal critic of the bank, which he accuses of overprinting money.

“Canada is a country with political institutions that are, in many cases, the envy of the world. Yet there are politicians – who absolutely do know better – who are not only taking those institutions for granted, they’re willing to actively undermine them if it gives them the slightest political advantage,” said Morneau.