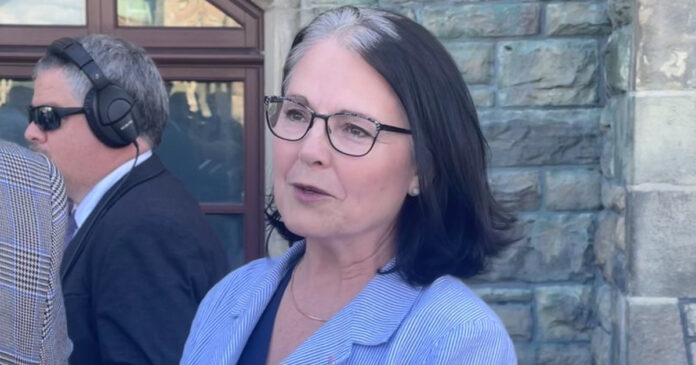 Conservative Party of Canada (CPC) MP Cathay Wagantall was kicked out of the House of Commons precinct Friday after she refused to comply with orders requiring Members of Parliament (MPs) to show proof of vaccination or a valid medical exemption.

While Wagantall said she initially submitted a medical exemption, the Trudeau government changed the rules around exemptions in a motion adopted with the help of the New Democrats.

Under the revised rules, exemptions are now subject to the Ontario Ministry of Health and the National Advisory Committee on Immunization, which only offers exemptions based on pre-existing conditions to vaccinations, myocarditis and a past severe allergic reaction to a vaccine ingredient.

Wagantall addressed her removal at a Friday press conference, where she said her goal was “to not leave unless I was basically forced to, which to some degree happened.” Wagantall says she ended up leaving the precinct on her own.

The Yorkton – Melville MP discussed how the Trudeau government’s vaccine mandates have affected her ability to do her job as an elected official.

Unvaccinated Canadians are still unable to board airplanes or trains due to the government’s vaccine regime.

Wagantall, who is also barred from accessing her parliamentary office due to the mandates, says she has found working from home to be frustrating.

“I’m a multitasker. And it’s amazing what else you can get done while you’re supposed to be doing what you’re doing in the House. And I find that really frustrating.”

The CPC MP also called out prime minister Justin Trudeau’s hypocrisy, claiming that when Trudeau attended an event she hosted in Ottawa a few days ago, he sat next to her without a mask.

“I had the opportunity to host the National Prayer Breakfast a couple of days ago… the prime minister was there.” She said Trudeau sat beside her “for an hour and a half in very close quarters with no mask” as they were eating and singing.

“The hypocrisy is just unbearable,” she said.

Despite not being able to take her seat in the House, Wagantall is refusing to back down.

“I’m prepared to do whatever I need to do to continue to do my job as best I can in light of the circumstances,” she said.

When asked by True North why she thinks Trudeau is continuing to hold out on vaccine mandates, Wagantall stated she believes there is an alternative agenda behind the decision “because it’s not about Covid.”

While all Canadian provinces have ended their vaccine passport programs and other countries have completely removed travel mandates and restrictions, the Trudeau government has opted to continue enforcing its mandates.

Earlier this week, the government extended Canada’s Covid travel mandates until at least June 30. The government’s extension comes only a day after voting down a Conservative opposition motion which called on the government to end pandemic mandates and restrictions at Canadian borders.

Wagantall was first elected to Parliament in 2015 and is known for her social conservative advocacy.

She had previously introduced a private members bill which would have banned sex selected abortion. However, her bill was defeated after the majority of MPs, including then CPC leader Erin O’Toole, voted against it.