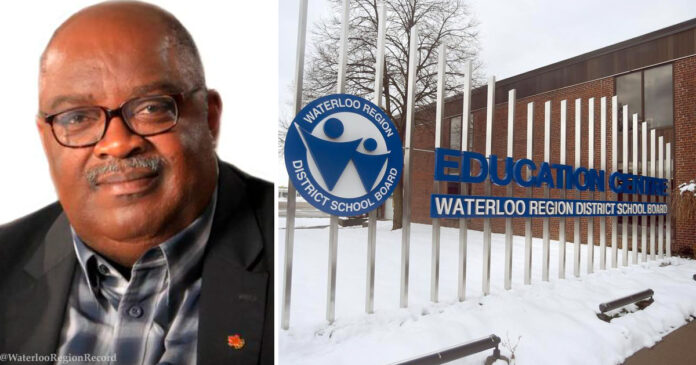 The petty wokesters have cancelled another one.

In a mere 30 minutes, Waterloo Regional District School board (WRDSB) trustees voted 6-3 Monday to sanction the board’s only black trustee Mike Ramsay over a Code of Conduct complaint that has apparently been in the works since February.

Some six of the board’s trustees – all of them left-leaning – appeared gleeful as they voted to apply the maximum number of sanctions available to them.

These include barring Ramsay from all committees of the whole and in-camera meetings until September 30, essentially the end of the current term.

They also barred him from the next board meeting.

Ramsay, a six-term trustee and regular thorn in the side of the woke trustees for his common-sense approach, was not permitted to speak in his defense.

Sources say he was chastised very publicly for merely retweeting some of my True North stories on the WRDSB and those of other conservative writers. The complainant has alleged, apparently, that it was “disgraceful” to promote “alt-right” media.

Kitchener trustee Laurie Tremble did not vote, suggesting she was the complainant.

The complaint and the report from the integrity commissioner were kept secret.

In fact, board chairman Scott Piatkowksi would only say that there was a complaint but provided no details as to what it was about.

Piatkowski is the subject of a $1.7-M defamation suit filed by 20-year teacher Carolyn Burjoski, who was shut down four minutes into her presentation to the board in January when she discussed two highly sexualized books in the board’s elementary school libraries.

She was called “transphobic,” removed from the classroom and subjected to an investigation. She has since retired from teaching.

Piatkowski has made no move to step down from his position, even as chairman, since the lawsuit was filed a month ago.

Eric Roher, the national education lead with the pricey law firm Borden Ladner Gervais was present at the Monday night meeting to answer any questions. The firm was apparently hired to investigate the integrity complaint – an obscene waste of taxpayer money.

Immediately after the meeting, Ramsay issued a statement on Twitter indicating that the lawyers hired by the board have been paid thousands of dollars on a “frivolous complaint” which could have been directed for classroom use.

He intimated that the trustee who complained was upset that Ramsay had shared stories from journalists which the complainant (Tremble) found “demeaning and disparaging.”

He also called the complaint a “political vendetta.”

Reached after the meeting, Ramsay said he believed the whole complaint and the sanctions were “retribution” because he’d written to the province in February stating concerns about some of the board decisions made in camera.

“They were out for blood,” he said. “They don’t care what’s fair and just.”