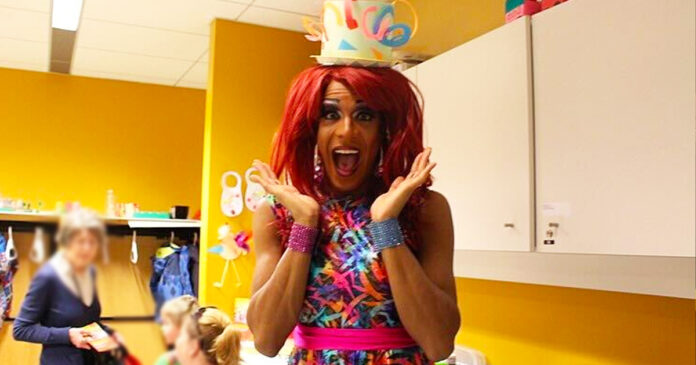 An elementary school teacher in Quebec who is taking part in a drag queen story hour this weekend says he has been doing similar events since 2016.

Thirty-seven year-old Sebastien Potvin, who goes by the drag name “Barbada de Barbades,” will be performing for two audiences at the Dorval Library near Montreal Saturday.

Potvin, who works as an elementary school music teacher on the south shore of Montreal, also performs at drag on television, at brunches and at gay cabaret bars.

“June is Pride Month. Come meet and listen to the magnificent, one-and-only drag queen Barbada, who will enthrall you with her wonderful stories.” reads the public library’s website.

“We invite anyone and everyone to put on some fancy clothes and attend this inspiring activity that encourages openness to differences, acceptance, and fun!”

The fully booked “family” event sponsored by the Friends of the Dorval Library will be in both French and English.

True North reached out to Potvin with questions regarding his drag shows for children but he did not respond in time of publication.

According to Potvin’s website, his drag queen story hours are targeted to kids three to six years old, but “younger children are welcome.”

Potvin says he usually starts off his story hours “with a grand entrance,” followed by an explanation of what a drag queen is and why has chosen to be one. He then “asks the children to introduce themselves by saying their name or a made-up name.”

In a 2019 video from the Pointe au Tremble library published on Youtube, Potvin read to children a story called “Deux garçons et un secret” (two boys and a secret), which touches on the topic of homosexuality.

In addition to doing drag queen story hours across the province, Potvin has also been the host of a Radio-Canada children’s music show.

In his show Barbada, Potvin is joined by a “company of stuffed animals, but also of artists who will deliver a special performance for the children according to the theme of each episode.”

Potvin also appeared in a Radio-Canada video where he explained the “LGBTQI2A+” acronym to children. In the same video, he shared how he once questioned his sexual orientation and encouraged kids to ask people their preferred pronouns and use gender-neutral language.

“LGBTQI2A+ is a term to bring all of this (sexual orientations, genders, gender identities and gender expressions) togeather,” said Potvin, adding that the term is meant to show “that it’s not always just black and just white.”

“When I was young, I was questioning. I have sometimes wondered about my sexual orientation or even, at times, my gender identity.”

Potvin also said that “if you see someone in front of you and you’re not sure of their gender identity. You’re not sure if they prefer us to say ‘he’ or ‘she’. Just ask, but do not judge.”

He added that it has happened at times that people were not sure if he was a man or a woman.

In an interview with Le Devoir, which described him as part of “a new generation of flamboyant teachers, sometimes with strong opinions, who break the mold,” Potvin defended doing drag performances while also being a teacher.

“We have to stop thinking that teachers are just teachers,” said Potvin, adding that “we have the right to have a life outside of work.”

“For a long time, our profession was seen as a vocation, but that is no longer the case. It’s a job like any other.”

Potvin also said he feels supported by his school administration, and hopes to encourage respect for others, for differences and for self acceptance.

As for discussing his drag with students, Potvin says “if they have heard about Barbada and they ask me about it, I tell them the truth.”

Drag queen children’s events have been popping up around Canada, the United States, and even Europe for the month of June, dubbed as LGBTQ “pride month”.

Much controversy has however arisen out of the events, with some claiming they are not age appropriate and others going as far as saying they are a form of grooming.

Last week, a drag event for kids in Dallas, Texas also caused outrage, after drag queens were seen dancing in front of kids and even taking money from them, while a neon light with the phrase “It’s Not Gonna Lick Itself” lit in the background.

Some have since called for legislation that would make drag-themed children’s events illegal.