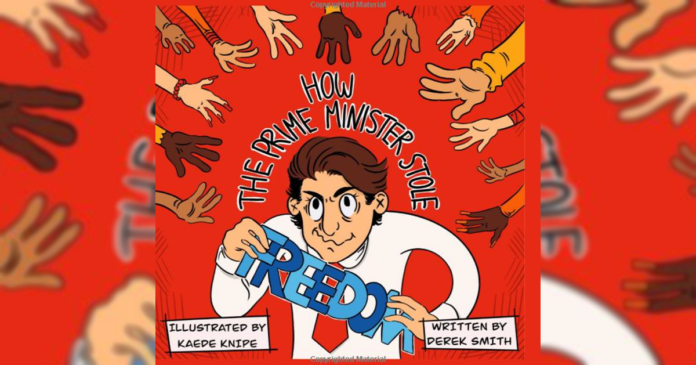 The anti-Trudeau children’s satire How the Prime Minister Stole Freedom is the top-selling book on Amazon Canada.

The book, a political spin on Dr. Seuss’s How the Grinch Stole Christmas, satirizes Justin Trudeau’s clampdown on free speech through Covid-19 measures and the invocation of the Emergencies Act to end the Freedom Convoy protest.

The story is about the main character, an unnamed ‘prime minister’ bearing a striking resemblance to Justin Trudeau, who hates freedoms, believes Canadians exist to serve him and imposes mandates and rules while ignoring rights and the people’s requests.

Paralleling the Grinch, the prime minister is depicted as vindictive and sneering while also being foolish. The book describes him as having a brain “three sizes too small.”

The book includes clever rhymes with hard-hitting commentary about the government’s Covid-19 response.

“Many people were fired or took daily swabs for refusing the vaccine over their jobs,” one passage reads.

The author, Derek Smith, is a video game streamer on Twitch whose authoring experience is limited to a superhero novel. He began writing political satire with the children’s book Let’s Go, Brandon.

Smith describes himself as politically neutral and having voted for multiple political parties with varying viewpoints during his time as an adult.

Smith was inspired by the Freedom Convoy protesters and devastated by the Trudeau government’s crackdown on the demonstrators, driving Smith to write the book and employ the help of Kaede Knipe to illustrate.

The book does not mention Justin Trudeau by name, only referring to him as ‘prime minister’ for legal reasons alluded to in the introduction.

While the Freedom Convoy ended in January, books commemorating and celebrating the convoy are beginning to build momentum as this book has, as well as Andrew Lawton’s soon-to-be-released The Freedom Convoy: The Inside Story of Three Weeks that Shook the World.

Political satire in the form of a children’s book is starting to become a trend.

Before publishing How the Prime Minister Stole Freedom, Smith wrote a book called Let’s Go, Brandon about a boy who can’t get anything right – meant to mirror US President Joe Biden.

Matt Walsh of the Daily Wire released a children’s book called Johnny the Walrus, where he satirized transgender ideology.