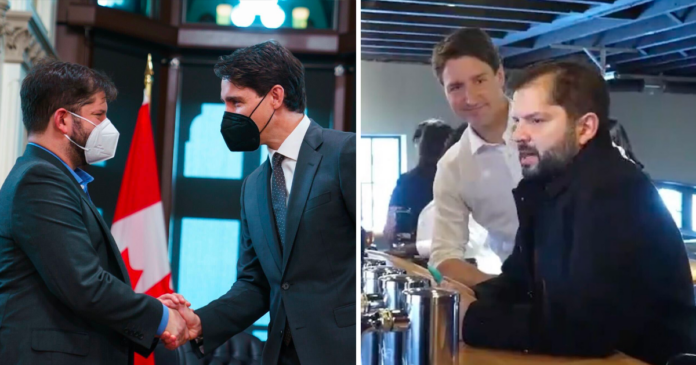 While attending the Summits of the Americas in Los Angeles, Prime Minister Justin Trudeau was slammed on social media over his double standards when it came to wearing a mask.

Photos from the prime minister’s trip show him wearing a mask in certain settings while being completely maskless in other similar settings.

Poilievre referenced a photo of Trudeau and Chilean President Gabriel Boric shaking hands while wearing masks and another photo where they are being served by a bartender who is masked while they are not.

Globe and Mail columnist Gary Mason also agreed with Poilievre in response to the tweet which he called “hard to argue with.”

The conservative advocacy group Canada Proud also called out Trudeau for not wearing a mask while attending a meeting with fellow delegates at the summit.

“Hey Trudeau, where’s your mask? Is there no pandemic in California?” tweeted Canada Proud.

Interim Conservative leader Candice Bergen raised the issue in the House of Commons also after accusing the prime minister of flaunting his personal freedoms abroad while maintaining extreme Covid mandates on Canadians.

“The prime minister has jetted off on another international trip. No airport line ups for him and I bet we’re going to see more pictures of him with his mask off having a great time. He flaunts the personal freedoms he’s enjoying abroad while back here Canadians are suffering under his out of date restrictions,” said Bergen.

Additionally, researcher Dr. Eli David took to Twitter to slam Trudeau for being maskless abroad but a “mask-fanatic” in Canada.

While at the summit, Trudeau was asked why he wears a mask inconsistently by a reporter and he evaded answering the question directly.

“Your government continues to support mask mandates in the House of Commons and in federally regulated placed like airports but it appears that you wear a mask inconsistently and depending on different situations,” said the reporter. “Do you still believe that a mask mandate should still be in place? And if so, in what types of situations?”

“First of all, I understand how tired everyone is of the pandemic, of the different rules and restrictions we have to go through but most people understand, this pandemic is not over yet,” said Trudeau. “We continue to see our hospitals filled with people suffering tremendous consequences. We continue to see more spreads. We continue to run the risk of new variants every step of the way.”