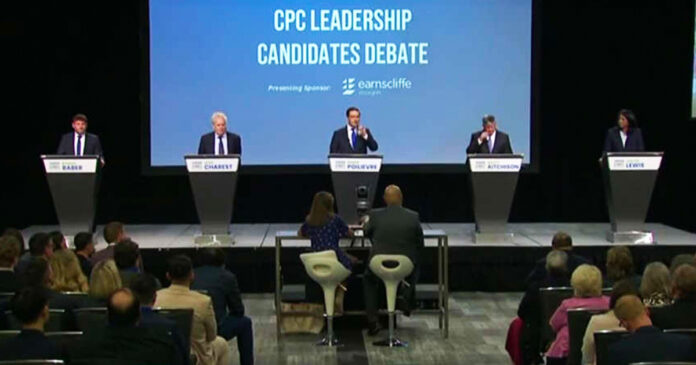 Independent news outlet the Western Standard is cancelling a planned Conservative leadership debate in Calgary after a prominent candidate would not confirm their attendance.

While Fildebrandt would not reveal the identity of the candidate whose non-attendance is responsible for the debate’s cancellation, he did say, “it wouldn’t be all that difficult to find out.”

Many on social media have since claimed Fildebrandt was referring to Pierre Poilievre, the current front-runner.

Poilievre is also the only leadership candidate that has not publicly agreed to a third debate organized by the party. In addition, Poilievre would not confirm his attendance at the Independent Press Gallery debate in May, contributing to its cancellation.

Fildebrandt said that the outlet had not yet publicly announced the debate, which would have taken place on Jul. 9, because they were awaiting confirmation from the sixth candidate, which they say “was key to ticket sales.”

The Western Standard debate “would have focused on Western issues,  and — I believe — have been of great importance to Westerners in general, and conservatives more broadly,” said Fildebrandt.

While the Conservative Party of Canada did hold its official English debate in Edmonton, it lacked questions on western issues.

Fildebrandt also promised that unlike the debate moderated by Clark, the Western Standard debate would have not had the infamous “sad trombone,” referring to a buzzer Clark used whenever candidates attacked other candidates by name or mentioned prime minister Trudeau.

Following Fildebrandt’s announcement, some leadership candidates took to social media to share their disappointment with the news.

Jean Charest mentioned that two debates have been cancelled due to a particular candidate’s unwillingness to attend. He added that the next Conservative leader “must have the courage to stand up and defend the interests of Western Canadians.”

The Independent Press Gallery also cancelled their debate due to lack of confirmation from candidates.

Meanwhile, Patrick Brown said he had been “looking forward, as were four other candidates, to a robust conversation about our Party’s future”.

Brown was the only candidate that did not attend the first leadership debate – organized by the Canada Strong and Free Network. Brown also did not agree to participate in a planned debate by the Independent Press Gallery.

True North reached out to the Poilievre campaign for comment but did not hear back by time of publication.