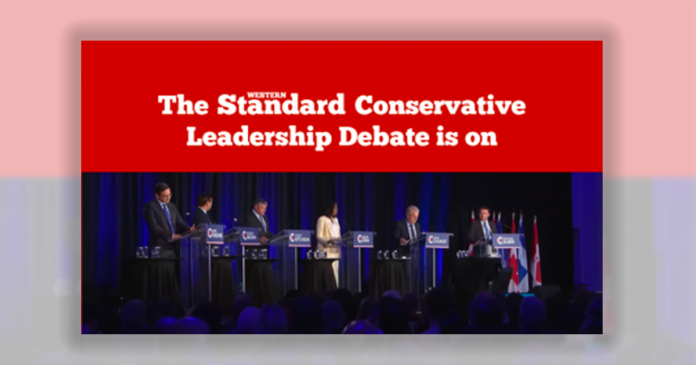 Alberta-based independent media outlet the Western Standard has rescheduled its previously cancelled Conservative leadership debate in Calgary. However, contender Leslyn Lewis has announced she will not attend.

The debate was originally cancelled after only five of the six leadership candidates confirmed their participation. Conservative sources told True North that Pierre Poilievre was the lone candidate to decline.

“We’d originally planned the debate for July 9 at a massive venue, but without the confirmed participation of all candidates, it would not have been financially viable,” said Western Standard president Derek Fildebrandt.

The rescheduled debate is set to take place on Friday, Jul. 8 at 3:00pm MT at the Calgary Petroleum Club.

Fildebrandt said that following the debate cancellation announcement, many people reached out asking for an alternative to be organized.

The outlet said that all leadership candidates except for Poilievre had confirmed their attendance to the newly scheduled debate; however, Leslyn Lewis has indicated that she will not be able to attend the event.

“After the Western Standard canceled the debate in Calgary, I adjusted my calendar in order to make sure I could reach as many ridings in person as possible,” said Lewis in a statement. Adding that she made a commitment to be in the North.

Lewis also said the Western Standard’s announcement of the new date and time was made without her knowledge.

True North reached out to other leadership campaigns to ask if they had confirmed their attendance before the new debate details were made public.

Jean Charest’s communication director Michelle Coates Mather explained that their campaign was “informed of the new date for the Western Standard debate on Wednesday afternoon.”

Mather added that their campaign is “considering all opportunities to talk to members and donors across Canada,” and that unless they hear otherwise, Charest will be at the debate.

Scott Aitchison campaign spokesperson Jamie Ellerton said that their campaign “has been in contact with the debate organizers throughout this week,” and confirmed Aitchison’s attendance.

The Roman Baber campaign did not provide a response in time for publication.

He added that the debate “won’t be a boring all candidates forum. And it certainly won’t include sad trombones,” referring to a buzzer used in the official English Conservative Party debate when candidates attacked each other or mentioned Justin Trudeau.

Tickets for the Western Standard’s Calgary Conservative leadership debate are currently on sale for $25 on Eventbrite.