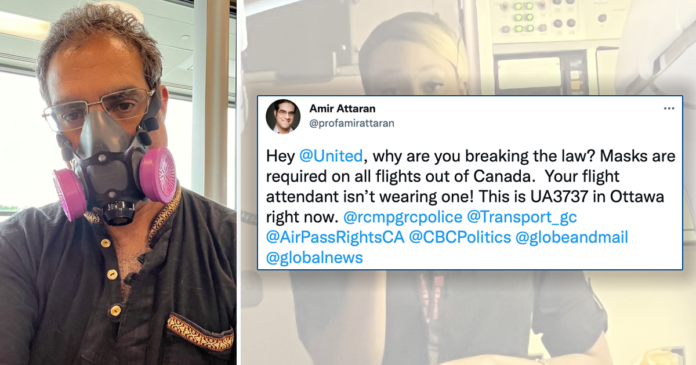 On Saturday, Attaran posted a picture of a flight attendant on a United flight from Ottawa to Chicago and accused the airline of breaking the law because “masks are required on all flights out of Canada.”

Transport Canada says masks are mandatory on all flights to and from Canada, a policy that has created confusion given that masking is not required on planes in America.

“Canada is not the USA, you f***ers,” said Attaran, who added that United should be banned from operating flights to Canada for not following the Trudeau government’s mask mandates.

Attaran’s online conduct was quickly criticized by Canadian and international figures from all sides of the political spectrum.

Pushaw also called out United’s response to Attaran and accused the airline of throwing its employees under the bus. United had thanked Attaran for bringing the issue to their attention.

Do you know what kind of hell flight attendants have been through during this pandemic? Dealing with harassment and bullying nonstop? And you post this poor woman’s photo and target her?

And then admit later she didn’t even know? https://t.co/kPVLbLQPeS

Meanwhile, former University of Toronto professor Jordan Peterson reacted to Attaran’s tweets by calling him a “pathetic ranfink” and a “horrible piece of work.”

Attaran responded to Peterson’s criticism by claiming he was a baby. He also challenged him to a public debate in Ottawa.

This is not the first time that the University of Ottawa professor has caused controversy for his conduct on social media.

Attaran, whose Twitter bio states that he “wrecks grifters, anti-vaxxers & scientific illiterates,” has also come under fire for comments he made about unvaccinated people.