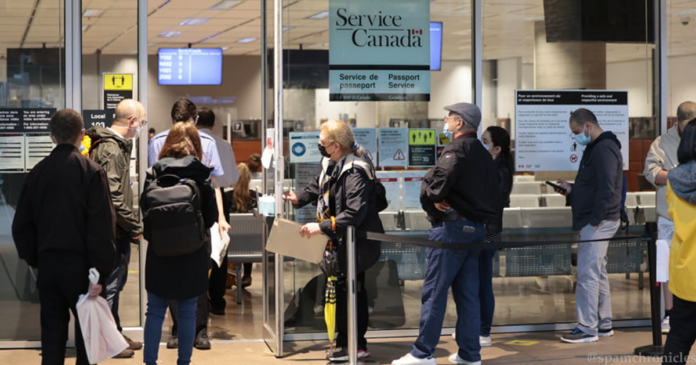 Despite processing delays at passport offices, which have forced Canadians to wait hours for their passports, Service Canada suspended hundreds of employees due to their vaccine status.

According to Blacklock’s Reporter, Service Canada suspended 249 employees to comply with the Trudeau government’s vaccine mandate program for federal employees.

Passport offices have been seeing unacceptably long wait times across the country – nearly seven hours at a Vancouver office and nearly five hours at an Ottawa office.

Prior to the pandemic, Service Canada typically processed between two million and five million passports annually. However, passport offices have only been able to process 1.5 million passports during the two pandemic years.

In some instances, an hour before offices open, the line-up outside wraps around the building.

The minister in charge of Service Canada Karina Gould could not provide a timeline of when the ministry will resolve the delays.

“Believe me, I wish it was sooner rather than later. I completely understand the frustration that Canadians are facing right now,” she said. “I can’t, unfortunately, give you that date. What I can give you is assurance that this is my number one priority.”

Minister Karina Gould told the House of Commons in May, “(I)f someone has urgent travel in that regard, I would recommend you contact your Member of Parliament.”

Conservative MP Marc Dalton grilled the government for the long wait times. Dalton claims his assistant was put on hold for five hours when they attempted to call the passport offices.

“The hotline is cold,” said Dalton. “My assistant waited five hours on Wednesday to get through.”

On the issue of passport wait times, Conservative MP Gérard Deltell told the House of Commons, “(W)hen I see this I feel bad for my country. Canada is a G7 country, not a Third World Country.”

The government has not made it clear if it will reinstate any of the 249 employees laid off due to the vaccine mandate, nor have they made clear whether or not repealing the vaccine mandate is part of the effort to alleviate passport processing pressure.