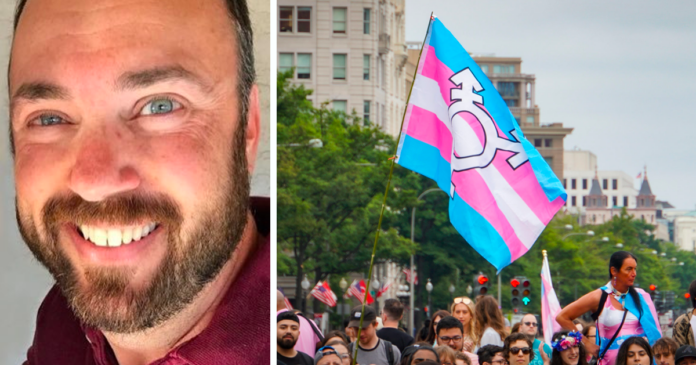 Aaron Kimberly is a transsexual man and a mental health nurse who’s worked with gender dysphoric youth. He co-founded the Gender Dysphoria Alliance, which seeks to facilitate a more evidence-based, less ideological conversation about gender dysphoria.

The following op-ed is based on Aaron’s own lived experiences and some of the theories discussed were developed based on his experience working as a mental health nurse and as a transexual man.

When I was a little girl, from as early as age 3, I looked to boys and men as role models for social behaviour. At age 6, I’d stand on a stool at the bathroom mirror with my dad’s old toy shaving set to practice shaving my imaginary beard. In childhood social play, I was always male characters, like Luke Skywalker. Many people thought I was a boy, so I was accidentally placed on a boys’ baseball team for a season — which I thought was great.

But it was distressing too because no one understood my behaviour — including me. I had the deep sense that I was in the wrong category, which I realize now was gender dysphoria.

You would think that today’s gender revolution would make things easier on kids like me, who are now often identified as trans. In fact, I did transition when I was 33 and, though it did help me feel more congruent, that decision was largely based on misinformation.

I would not have benefited from the kind of ideology that many kids are being taught today: that trans is a separate type of personhood, and that my experience means that I’m literally the opposite sex; that I have a mysterious “gendered soul” that was born in the wrong body; or that biological sex is a “colonial construction” that doesn’t really exist. Though I did prefer to be “one of the boys,” figuratively speaking, I would have felt very uncomfortable using the boys’ locker room. I would have still used a private bathroom.

What I would have benefited from is understanding the truth about myself and the creation of space to be myself — truths that have largely been erased by the viciousness of today’s gender debates.

Some gay and lesbian people like me experience a psychological phenomenon that I think is best described as “opposite-sex social mirroring.” This isn’t a clinical term, but a descriptive one I use to help people understand my experience. That is, I took on the social behaviours (e.g. mannerisms, speech patterns) and roles associated with the opposite sex; extreme gender nonconformity is often associated with later same-sex attraction, although I didn’t know that then. As a young adult, I eventually found the butch/femme lesbian subculture in which many butches had male names and were referred to by male pronouns. But none of us were confused about which biological sex we were, or insisting that we were actually men, or that trans women were women.

Not all gay and lesbian people experience this kind of “opposite-sex social mirroring”, and not all people who experience this mirroring chose to transition. There are different kinds of homosexuality, with different developmental pathways, and different degrees of intensity of the phenomenon. Clinicians like me have increasingly noticed a correlation between female to male transsexualism and autism, some types of intersex conditions, and gynecological problems like Poly Cystic Ovarian Syndrome. What’s common to all of those conditions is testosterone.

Gay and lesbian “opposite-sex social mirroring” makes a lot of people uncomfortable, including many gay and lesbian people. For decades, radical feminist lesbians have been brutally critical of butch/femme culture, insisting that we are sellouts to “The Patriarchy” and just mimicking repressive stereotypes because we hate ourselves.

They refused, and many still do refuse, to accept that this is a type of homosexuality that exists across cultures. It has nothing to do with hating women. If all women had short hair and wore pants and all men had long hair and wore dresses, butches would have loved wearing dresses. We would have still mirrored the opposite sex and have more masculine behaviours and interests. It’s not about hair and clothing.

Sexual orientation is much more complicated and multi-dimensional than who we’re attracted to. It also influences social behaviour, occupational interests, bonding, and self-concept. Decades of research by sexologists like Dr. Ray Blanchard and Dr. Paul Vasey are very illuminating on these matters.

Within Dr. Blanchard’s typology, I am a “homosexual transsexual”, meaning, that I’m of a subset of gay/lesbian people who experience this type of Gender Dysphoria and chose to masculinize or feminize our appearance because of it. The sexology description of the relationship between homosexuality and opposite-sex social mirroring fits my experience exceptionally well and understanding this has vastly reduced my gender dysphoria — perhaps even more than physical transition did. And I wish I’d been told about it when I first sought help for gender dysphoria and advice about medical transition.

One reason I didn’t is that some trans women and other activists object to this research, asserting it’s rooted in “transphobia” or clinically deficient in some way and that it shouldn’t be used, and they’ve waged campaigns to discredit those who conducted this research. But doing so has made it harder for people like me to understand myself — this is vital research that must continue to be shared.

Instead of being honest about the connection between sexuality and gender dysphoria, we’ve come up with a language of liberation that confuses the reality: 78 genders, each with its own neo-pronoun.  Biological sex as a construct of “white colonizers.” Trans men are men. Everyone has a “gender identity,” or mysterious “gendered soul.” That’s not the truth.

Rather, it’s a series of politically motivated academic ideas about gender as a performance, and the “queering” of categories, that has obscured the truth and the important research about gender dysphoria.

Gender is now a political movement, one that hasn’t helped people like me. Those ideas made my gender dysphoria worse.

If young kids exhibit intense opposite-sex social mirroring, they’re probably gay and are expressing a natural gay trait. Eleven studies to date show that 60-90% of kids with gender dysphoria resolve it by adolescence. There’s no need to steep them in Queer Theory or tell them they have the brain of one sex and the body of another. Just love them and leave them alone.  Create space for them to be themselves.

Aaron Kimberly is a transsexual man and a mental health nurse who’s worked with gender dysphoric youth. He co-founded the Gender Dysphoria Alliance, which seeks to facilitate a more evidence-based, less ideological conversation about gender dysphoria.