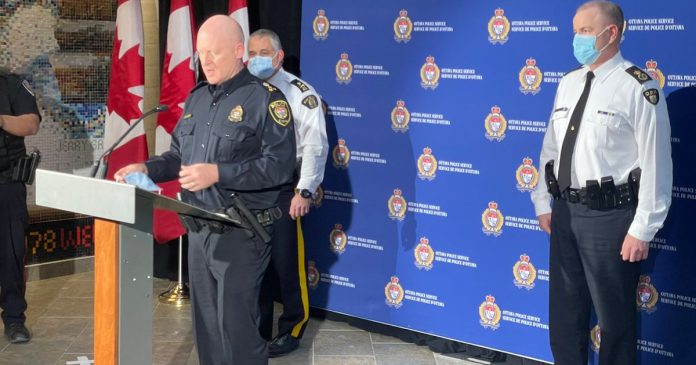 Police will be restricting access to Ottawa’s downtown core this week ahead of planned freedom events for the arrival of Canadian Armed Forces Veteran James Topp and Canada Day.

The exclusion zone will border Booth Street in the west, Laurier Avenue in the south, Colonel By Drive and Sussex Drive in the east and Wellington Street in the north.

Only residential and business traffic will be given access to the control zone, along with pedestrians, cyclists and public transit buses.

Meanwhile, vehicles that are “taking part in any form of demonstration, event, protest or rally” will be banned.

The city is also prohibiting street parking and stopping inside the control zone, and said that non-compliance will result in fines and towed vehicles. Police will be setting up checkpoints to restrict access to the control zone. Barricades and heavy equipment will also be used.

“There are not going to be warnings or second chances. If the law is broken, regardless of who breaks it, there will be consequences,” said Ottawa Mayor Jim Watson at a Monday morning press conference.

In addition to limiting access to downtown, the City of Ottawa will be closing some roads on Canada Day.

“Getting around downtown on Canada Day will be more complicated than usual this year,” said Watson, adding that people are encouraged to “plan ahead and to expect delays.”

Ottawa Police are also calling in backup from other municipal police forces as well as the RCMP.

“We are prepared to take decisive and lawful action to deal with threats, occupation attempts and other unlawful behaviour that we observe,” said Interim Police Chief Steve Bell, adding that police “have authorities to enter public and private property on behalf of the property owner to remove anyone attempting to occupy or set up structures.”

James Topp is set to arrive at the Tomb of the Unknown Soldier on Thursday, Jun. 30 at 6:00 p.m. ET. Freedom events on Canada Day will take place downtown beginning 9:00a.m ET and ending at 8:00p.m. ET.

The Ottawa Police Service implemented similar restrictions during the Rolling Thunder bike convoy that rode into the nation’s capital in April.