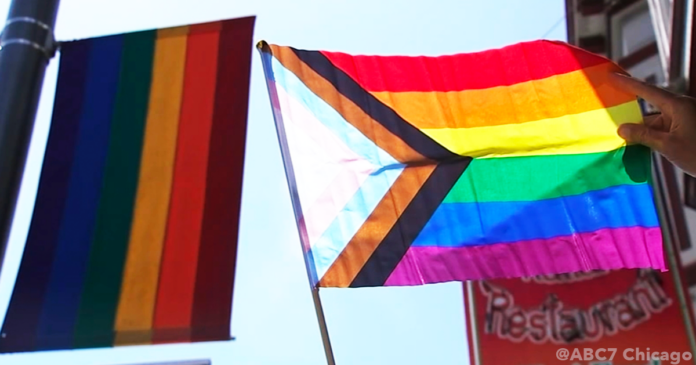 Earlier this week, I cycled by a TD Bank in downtown Toronto which had a huge Progress Pride flag in its window together with the words, “Forever Progressing.”

TD Bank has been a sponsor of Pride month for 18 years and it’s no surprise that the financial institution would want to display its support in its branches.

Sadly, seeing the Progress Pride flag replace the traditional rainbow flag in TD Bank windows was not a huge stretch either considering that over the years when I wrote about the hijacking of the Pride parade by Black Lives Matter (BLM) and the decision to ban police from marching (as BLM demanded), the bank did not choose to weigh in at all.

The Progress Pride flag flew all over Church St. – Toronto’s gay neighbourhood – when I went down to take in Pride weekend activities.

There were few, if any, rainbow flags.

Vietnam war veteran and drag performer Gilbert Baker created the rainbow flag after being commissioned to do so for the San Francisco Pride parade by gay icon Harvey Milk.

From 1978, the rainbow flag became the symbol of the lesbian, gay, bisexual and transgender (LGBT) movements.

The variety of colours was meant to mark the diversity of the LGBT community.

The absence of the rainbow flag in Toronto’s Gay village on Pride weekend and the push by corporate Canada – the TD Bank included – to embrace the Progress Pride flag is a disturbing trend.

If the rainbow flag is meant to embrace the diversity of the LGBT community, why the need for a so-called new, improved flag that has at its core the suggestion that some gays, lesbians, bisexuals and trans people are more marginalized than others?

Contrary to what TD Bank wants us to believe – that as a corporate entity they are forever progressing – that’s not what I call progress.

I call it divisiveness.

I also call it pandering to a fringe minority of radical activists who have hijacked Pride.

It’s hard to believe that corporations like my own bank – TD – think that some lesbians and gays are suffering more because they are black and brown.

Corporations have merely jumped on the bandwagon for fear they’ll be cancelled by this very vocal and often hateful group of activists.

In Toronto, this divisiveness started building when Pride Toronto and our fearful politicians capitulated to BLM, whose screaming activists held the parade hostage in 2016.

BLM and its “defund the police” activists demanded that the police be banned from the parade in 2017 and 2018 – and subsequently insisted they not return in 2019.

Many gay men I interviewed at the time were horrified that the rights they fought so hard for and the relations they built up with the police subsequent to famous Bathouse Raids in 1981, were so quickly and decisively forgotten.

I’m willing to bet the gays and lesbians I saw on Church St. on Pride weekend have no interest and perhaps no clue the battles LGBT individuals went through in the 1980s and 1990s to come out.

Those flying the Progress Pride, so desperate to be woke, take for granted the obstacles and the fear those before them endured to win our precious rights.

It’s not to say homophobia still doesn’t exist (I’ve experienced it recently myself and there are still countries that strictly ban homosexuality).

But the pendulum has swung too far the other way.

Once respected gay rights organizations, desperately in search of a purpose, have turned to trying to indoctrinate young schoolkids with trans and gender identity workshops.

Besides the Progress Pride flag, our woke school boards and institutions have added so many initials, the average person can’t keep track.

It’s no longer LGBT but an alphabet soup of LGBTQQIP2SAA rights – many of them only related to LGBT rights because they involve some sort of sexual or non-sexual identity.

It’s not surprising that in our culture of trying to assign everyone to a particular identity group that this should become part of Pride.

As one gay friend remarked this week, the lesbian and gay community have been cast aside – forced to take a back seat to a series of unrelated special interest groups.

It’s not the least bit progressive.

It’s divisive and it has completely diluted the meaning of gay Pride.