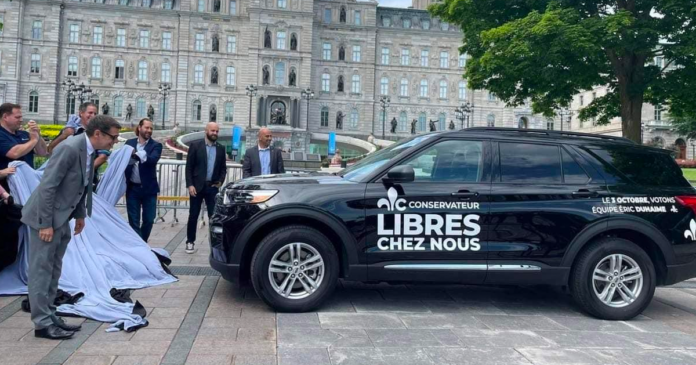 The Conservative Party of Quebec (PCQ) unveiled a freedom-themed slogan ahead of the provincial election campaign, which is set to take place on October 3, 2022.

PCQ leader Eric Duhaime revealed Tuesday that the party will run on the slogan “Libres chez-nous”, which translates to “Free in our own home.”

The slogan is a spin on the famous “Maîtres chez-nous” (Masters in our own home) phrase, used in the 1960s during the quiet revolution – a period where Quebec saw major socio-political and socio-cultural reforms.

According to Duhaime, Quebecers are looking for more personal autonomy, and the PCQ is proposing to “give more freedom to all Quebecers.”

“‘Free in our own home’ is about respecting the freedom of choice of each individual, rather than big government imposing its choices,” said Duhaime.

The PCQ leader also touched on some of his party’s proposals, which include tax cuts, reforms to healthcare, more parental autonomy, energy independence and making public transit in Quebec City free rather than building a controversial light rail project which he believes is too expensive.

Duhaime and PCQ have been outspoken opponents of Quebec Premier Francois Legault’s Covid-19 restrictions – which have included lockdowns, curfews and vaccine mandates that limited access to groceries.

The PCQ placed sixth in the last provincial election with 1.46% of the vote; however the party now has over 50,000 members and has made significant gains in both the polls and a recent by-election.

The PCQ is polling in second place in some of the polls published to 338Canada. One Mainstreet poll gave the party 24% support.

According to the Montreal Gazette Editorial Board, the PCQ’s rising popularity makes it difficult for the Legault Government to reimpose Covid restrictions before the election.

“Looking over its shoulder at the rise of the Quebec Conservative Party, a champion of those who oppose mandatory measures, the CAQ (Coalition Avenir Quebec) government will be especially loath to act,” wrote the Editorial Board in a piece calling for the return of mask mandates amid a potential seventh wave.