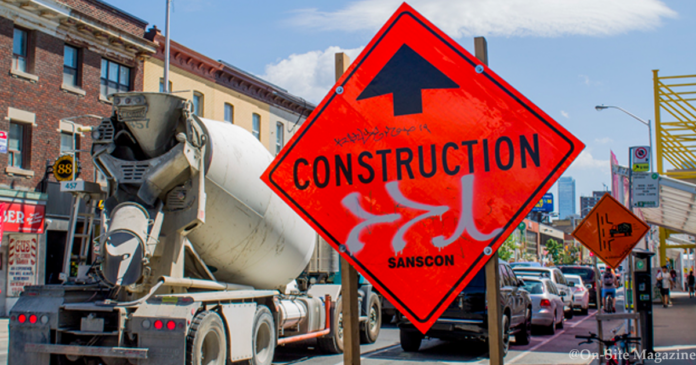 It strikes me that politicians of all stripes and at all levels of government are adept at dreaming up solutions that are looking for problems – wasting large amounts of money as they do so.

This phenomenon is common in cities across Canada where politicians and bureaucrats fritter away tax dollars on pet projects while ignoring the real priorities.

Oversight of the work is completely non-existent.

This cavalier use of public dollars has continued unabated post-Covid when money is seemingly tight and politicians are running never-before-seen deficits.

The concept hit very close to home five weeks ago when a series of city workers descended on my Toronto street.

The first two days they broke up a concrete sidewalk on Chaplin Cres. mere metres south of the never-ending Eglinton-Crosstown LRT construction mess. After destroying the sidewalk – which was freshly laid last summer – they dumped a mountain of rocks in a parking spot on my street.

They departed the next afternoon leaving the mountain of rocks and unfilled ruts on Chaplin Cres. and a leaking sewer which they had managed to damage while digging up the street.

A few days later another crew turned up to fill the ruts with asphalt. They rudely informed those of us who asked that it was not their job to cart away the rocks.

It took two calls to the city’s 3-1-1 helpline to get the rocks removed; another five calls over four weeks to get the leaky sewer fixed. The sewer runoff got worse by the week and by the end of the four weeks Chaplin Cres. resembled a river.

When a city truck turned up one morning about three weeks in, I begged them to report the sewer leak. But they told me, nicely at least, that they were only there to move stop signs.

The curb cut to a much-used crosswalk south of my street on Chaplin Cres. that eased pedestrians and cyclists crossing to the popular Beltline (an old railway line turned into a recreational trail) had been moved eight metres north. I assumed the city was about to move the crosswalk.

Sod laid where the curb cut was filled in is now all brown because no one thought to water it (too bad they didn’t use the water from the leaky sewer).

It wasn’t until a series of 4X4 trucks came careening into my street late in the afternoon this week and parked on my neighbour’s lawn that I got fed up.

To my surprise, my assumption that they were moving the oft-used crosswalk was completely erroneous.

In his wisdom, our councillor Josh Matlow, who operates his ward like a fiefdom and cancels those who criticize him, had in March directed his colleagues on council to approve two new stop signs and the removal of the crosswalk.

In his Feb. 14 letter to councillors (none of whom would care what is going on in other parts of the city), he claimed a petition was signed by residents on my street and Chaplin Cres stating the changes were needed because it was dangerous to turn left off of my street during rush hour.

We never saw such a petition. And his claims made no sense.

We’ve never had an issue turning left and removing a much-used crosswalk is nothing short of a recipe for disaster.

The job cost about $40,000 not including the time expended (and wasted) by the six different city crews and contractors or the three Toronto Water officials who worked the entire day on June 30 to fix the sewer (they were efficient at least).

So much for that famous proverb: If it ain’t broke, don’t fix it.

If you stop and add up all the $40,000 unnecessary projects that pander to a few and fix something that ain’t broken, there’s little wonder Canada’s cities are a crumbling mess.

In Toronto, we have sewers and water mains more than 50 years old desperately in need of replacement, our streets are full of craters and potholes and many of our parks have equipment that is rusty and unfit for use.

But on Chaplin Cres. just south of what will eventually be a new $9-billion LRT line (in whatever year it gets finished) we have two new $40,000 stop signs and one less crosswalk.

There are now six stop signs in a span of 700 metres.

It only took six weeks, six different crews, four weeks’ worth of running water from a leaky sewer, and a whole lot of attitude from the nearly two dozen city workers and contractors who infiltrated the intersection, strutted around trying to look busy, gossiped and played with their cellphones and parked on residential lawns like they owned the place.

The next time you’re stuck in traffic because of construction or your neighbourhood is disrupted by city workers, thank a politician.