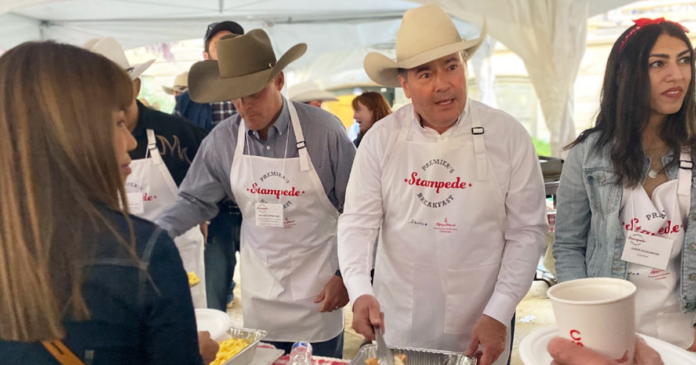 Alberta Premier Jason Kenney says he has “absolutely no regrets” about his time in the province’s top job or his decision to step down.

After narrowly surviving a leadership review with 51.4% of party support in May, Kenney announced he would step down as the United Conservative Party (UCP) leader and premier.

At his annual Calgary Stampede Premier’s pancake breakfast on Monday, Kenney told True North that he was elected on the “most ambitious platform” promised by any government and achieved 90% of those commitments, which focused on the economy.

“We’ve done what we said we would do. I did what I said I would do,” he told True North. “When I hand over the reins this fall, I’ll do so with a sense of achievement, of accomplishment, of no regret, and filled with optimism for this province.”

Ahead of the results of his leadership review, the premier repeatedly said he would stay as leader if he reached 50% of party support, which he called a majority mandate to continue. But just moments after the results were announced, the premier said he did not have enough support to continue and announced his intentions to resign.

Alberta’s next premier will inherit a $3.9 billion surplus, largely stemming from higher than expected oil prices and household income, according to the 2021–22 fiscal results. It marks the biggest fiscal turnaround in Alberta’s history.

The province also saw the creation of over 200,000 net new jobs since the beginning of last year, most of which are outside the energy sector, Kenney said.

“This is not simply about good commodity prices,” he said. “It’s about diversification and new investment being driven in part by our recovery plan and our open for business policies.”

Kenney used his last pancake breakfast as premier to announce “Alberta Day” which will be celebrated on September 1. It’s not a statutory holiday, but will occasionally fall on Labour Day, a stat holiday celebrated on the first Monday in September.

Quebec has “been brilliant” at celebrating what makes them distinctive and “we want to do the same thing here in Alberta,” Kenney said.

The former federal MP said he hasn’t decided whether he’ll stay on as MLA once the next premier is selected.

“That would partly be based on discussions I have with a future leader,” he said.

There are currently 10 candidates running for UCP leader and the premiership. Contenders have spent the last few days campaigning at the Calgary Stampede and seeking signatures for their nomination forms.

Candidates are nearing the July 20 cutoff, in which they must submit 2,000 signatures from across the province to continue running.

Party members will elect a new leader and premier on October 6.