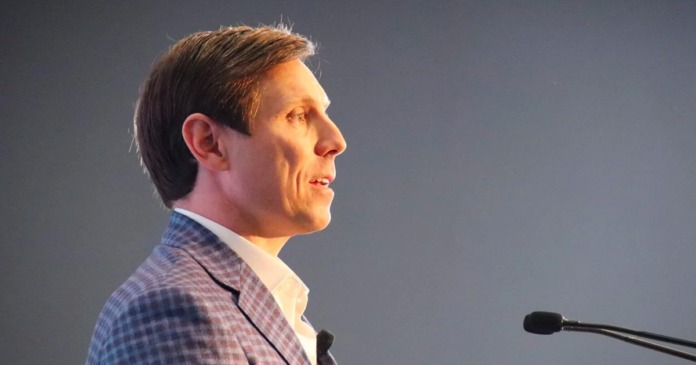 In one email obtained by True North from a Conservative member, the Brown campaign promotes its legal challenge to re-admit Brown in the Conservative leadership race, saying the Leadership Election Organizing Committee (LEOC) did not provide the candidate with due process to contest the allegations against him.

After candidates submit their cash deposit and are verified by the party as being eligible to run, they are given the party’s confidential membership list to promote their campaign to party members.

Brown’s email asks supporters to donate to his campaign, directing recipients to the fundraising portal set up on the Conservative party’s website.

“Federally, Patrick is conducting another legal challenge to the Conservative Party of Canada’s Leadership Election Organizing Committee’s decision to disqualify him from the party’s leadership race. Due process was never followed,” the email says.

The email was sent by campaign manager John Mykytyshyn, who claimed not to be a part of the Brown campaign when Rebel News reached out to him for comment in March.

Mykytyshyn did not respond to a request from True North by time of publication.

True North reached out to the Brown campaign’s spokesperson Chisholm Pothier for comment. Pothier confirmed that the campaign still had access to the party’s membership list.

“We received the list that was given at the time to communicate to the members on that list,” Pothier said. “We continue to do so.”

“Maybe you should stop being a newsletter for Poilievre and do some actual journalism,” he said.

Brown has retained renowned Canadian lawyer Marie Henein to challenge his disqualification, though it’s not clear whether there is a path to reinstatement through the courts.  Section 3.1.10 of the Conservative leadership rules clearly states that decisions made by LEOC are final and not subject to judicial review.

The Conservatives have disputed Brown’s claims that he wasn’t given sufficient time to respond to the party’s allegations, saying that all the details of their claims cannot be made public as the case was referred to Elections Canada.

“In the spirit of good faith and fairness, the party gave them every opportunity to clarify and resolve their concerns aside. Ultimately that effort failed,” said Ian Brodie in a statement sent to Conservative members.

“To be clear, the Brown campaign knew full well what the allegations were. Any suggestion to the contrary is simply incorrect.”

The Brown campaign claims that they only learned of the allegations once Brown’s former regional organizer Debbie Jodoin came forward to the media revealing herself to be the whistleblower.

Jodoin alleged that she was being paid by a corporation to work for the Brown campaign, which is prohibited in section 4.2.6 of the Conservative leadership election rules.